NewsBlaze News
Home Entertainment Features Dick Contino Passes Away, He Was King of the Accordions

When my Italian grandparents, Isolina and Salvatore Rizzolo, emigrated to this country at the turn of the century, they knew there was a dream here worth attaining. Like many of their generation, they brought with them the music of their old country, music that both inspired and comforted them while they searched for that dream.

My Nonna Isolina was a whiz on the concertina (a musical instrument similar to the accordion, but with buttons instead of a keyboard). She played it as a child in the streets of her hometown of Abruzzi, in the province of Piscarra, Italy. She beguiled me for hours with her wonderful stories of the old country, how she and her little band of musicians would roam the cobble stoned streets of her town playing their tunes for tips and handouts.

Playing the concertina was not only a way for grandma and her siblings to earn money, but, more importantly, it was a joyful way for them to express themselves in a lifestyle that was often filled with economic suffering and political suppression. So, it was only natural, when these children of Italy made that courageous journey of a lifetime to the new world that they took with them the musical instruments that had given them so much comfort and pleasure.

My grandparents’ taste in music was simple. They shared the same musical philosophy as famous accordion man Lawrence Welk who once said, “If they can’t hum it after I play it, then it’s not for me.”

Most Italian immigrants found it difficult to keep a job or to find career prospects. For many, the ability to play the accordion or concertina served as a way to increase their income by playing in little bistros and cafes.

Because of this, the accordion, like the organ grinder, was later used as an unflattering tool in which to stereotype the Italian American and the instrument soon became unpopular among the newer generation of Italian Americans.

“Accordion King” Dick Contino Was Still Performing in His 70s

Like most Italian Americans, who grew up in the 1940s and ’50s, the accordion was more than just a musical instrument, to me it was like a piece of household furniture as familiar to us as our grand Philco radio or Packard Bell TV set. In a way, it was an extension of ourselves, our family traditions and our heritage. And so, it was only natural that a young, handsome, Italian American would be chosen to represent the epitome of all these musical feelings.

Dick Contino was the young virtuoso who filled this need. In 1948, he appeared on Horace Heidt’s “Original Youth Opportunity Program” His rendition of “Lady of Spain” took the $250 first prize. His future success with hit songs – “Granada” and “Tico-Tico” sealed his success and inspired a generation of young Italian Americans to take accordion lessons. But few, if any, ever came close to attaining the Contino magic.

If, like myself, you often wondered whatever happened to the great accordion king, Dick Contino, wonder no more. He’s alive and well and appearing to sold out audiences across the country. It appears there are plenty of us die-hard fans still around to pack the showrooms.

I recently attended one of Contino’s sold-out performances in San Jose CA. I’m pleased to say the 73-year-old performer still had the magic and energy to keep his audience spellbound during his two hour performance, but “old” is not a word that should be used when describing this energetic and ageless entertainer. Contino’s youthful appearance and physique rival men half his age. But he’s the first to admit that his good looks and trim figure don’t come without a vigorous workout schedule and health program which he adheres to daily.

Contino, who believed in meeting his audiences up close and personal, mingled freely with his fans before show time. I took the opportunity to ask the star his secret to his longevity as an entertainer. His reply, “I love my life, my art and my audiences.”

I believe it to be true and it shows in his performances which are booked up solidly across the country. On November 17, ’03, Dick Contino was presented with a richly deserved Lifetime Achievement Award in recognition of his contribution to the entertainment world as an accordionist.

Our Italian ancestors’ talent for playing the accordion shouldn’t be compared to the abilities of professionals such as Lawrence Welk or Dick Contino. Instead, they should be judged by the amount of joy and entertainment they brought their family and in that sense, their talents and contributions were immeasurable.

My grandmother, like many who came with her across the sea, planned many times to return to her homeland, but world events or the economy prevented her from ever going home again. I remember how Grandma would sit alone in her room, for long hours, playing her concertina. By the look of contentment in her eyes, I suspect she was returning, again and again, if only in memory, to her home and family, to the beautiful coastal region of Piscarra, Italy, and to the echo of music made by a little band of musicians on the cobble stoned streets of Abruzzi. 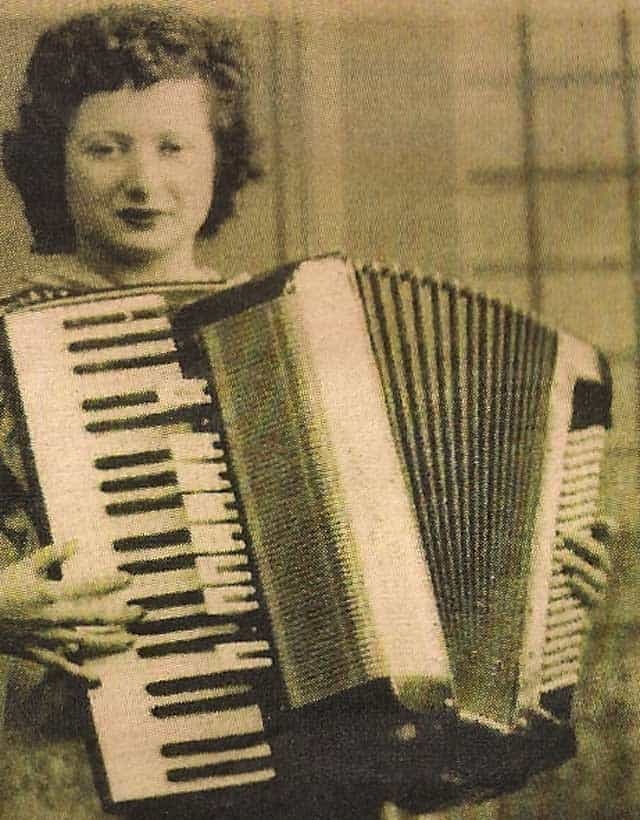