A bright young actress with a real head on her shoulders

Meet Crystal Hunt! She’s not at all like what you’d expect of a young successful movie actress. She’s clean, hard working, doesn’t drink, take drugs or get wild and crazy. In fact, she’s downright pleasant and fun to be with. Crystal epitomizes the positive role model we would all like to see our young people emulate.

Crystal Hunt is running back and forth between the west and east coast these days, helping with the promotions and release of Universal Picture’s Sydney White, in theaters September 21, 2007.

Crystal Hunt co-stars with Amanda Bynes, Sara Paxton and Matt Long. The movie is a college comedy that puts a modern-day twist on an age-old story. 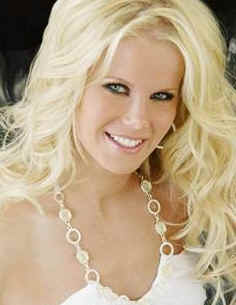 Sydney White tells the tale of a tomboy freshman who ditches her conniving sorority sisters and finds a new home with a group of very dorky outcasts. Fed up with the way they’ve all been treated, she’s off to war against the reigning campus royalty.

A 22 year old native of Clearwater Florida, Crystal has been performing in TV and commercials since her childhood years. In 1991 she won the role of Daughter in the hit movie Problem Child 2.

She delighted afternoon TV soap watchers of the show Guiding Light with her portrayal of evil teen, Lizzie Spaulding since her debut on the popular CBS soap opera in 2003. She fulfilled a perfect role, able to act angelic one moment and turn devilish when needed.

In 2005, she received her first Daytime Emmy Nomination, in the Outstanding Younger Actress category. She also earned Soap Opera Digest’s “Best Villainess” Award and was named one of the magazine’s “Hottest Newcomers.” Her other film credits include From Earth to Moon, Homeless Children, and the feature film The Derby Stallion, where she played Zac Efron’s love interest, Jill Overton.

She will portray Hannah in Brooklyn to Manhattan, a thriller to be released in 2008.

Her numerous commercials include a spot for Disney’s 25th anniversary celebration and an anti-drug advertisement with the award-winning pop music group NSYNC.

Crystal is an Official Ambassador for ChildHelp USA-one of the nation’s oldest national non-profits dedicated to the treatment and prevention of child abuse and neglect.