Tonight I am talking with Master William Mayhem, The Pirate Magician of St. Augustine who has recently been selected “as a Nominee/Finalist” for the Devils Dozen, Pirate Lord Contest.

DK: Hello William, tell me about yourself?

Master William Mayhem: Ok short and sweet… I was born in St. Augustine, Florida. I traveled as a military brat as a child, when I grew up I joined the Air Force and had assignments in Japan, Korea, Washington DC, and Area 51. Once I left the Air Force, I stayed in Las Vegas, Nevada where I worked as a Magician/Entertainer for many years before coming back home to St. Augustine… where I hoped to use my talents to make a life for myself and give back to my hometown, which has been a part of my family for 150 + years. 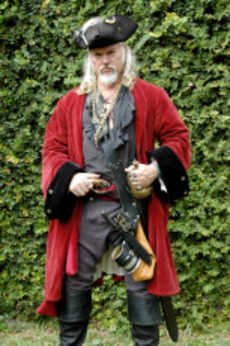 DK: What inspired you to become a magician?

Master William Mayhem: I started out as a fan and read everything I could on Harry Houdini. (In my day the Magicians of the time were Blackstone Jr., and Doug Henning… these are magicians that I admired) Also my Mentor Dick Bishop, (a Vegas Lounge magician in the Rat Pack Days) taught me that it wasn’t the tricks that made the magician it, was the persona you put to it all… if you believed then your audience would believe.

DK: What is your position on the Black Raven Pirate ship?

Master William Mayhem: I am the ship’s Magician, and only one part of the crew of other very fine talented entertainers. I also like to think that my 35 years of entertainment experience added to that of the other crew members, gives us the talent to put on a well rounded show that gives a bit of fun and enjoyment to everyone…

DK: Tell us about you recent nomination for Pirates Magazine? And the upcoming contest?

Master William Mayhem: Pirate magazine this past summer put the call out to pirate groups around the country to nominate their captains, which would then be voted on for a final selection of the Devil’s Dozen, Pirate Lords of the United States. The St. Augustine Swashbucklers Nominated me, and now I have been chosen as one of the final 24 Nominees. For the final voting process I ask that everyone who reads this article to please do me the honor of voting for me at Piratesmagazine.com. I also hope to have plenty of local support here in St. Augustine. Being a home town boy, I truly would like to succeed in this contest, not just for me but for what ever possibilities are on the horizon for the entire community.

The nomination is an honor to me in that so many of my pirate comrades and compatriots would consider me worthy of such a position. But more important, I hope that it will be something I can live up to as a representative of the pirate community and make all the pirates, along with my family and home town proud to support me. I hope it can become a unifying act for many of the pirates in this area.

DK: I notice that you are rather busy, but out of curiosity; what do you like to do in your spare time?

Master William Mayhem: I like to work on new ideas for magic, build and or rebuild magic tricks that fit into the pirate era. I have given of my talents to the St Francis house, the Florida School for the deaf and blind, several other schools in St Johns County, the 4H program of the county, the Cancer Society, and Give Kids the World charitable Organization. I also in 2007 and 2008 did a big scene set up of my home at Halloween time, in which I had over 400 visitors each year, and we collected cans of food for the homeless. There may be a few other smaller things I have forgotten… (laughs). Sometimes it all runs together in the hectic times of setting up and performing.

DK: Do you do private parties?

Master William Mayhem: I hire out for anything that I am asked to do, parties, weddings, corporate events, kid’s events… I am open to anything that my schedule permits and budgets permit… in this day and age budgets are not great for anyone, so I always try and find a common ground to be compensated for my work, without it killing the wallet of the parties interested in booking me for my service. This means that it’s not always about the money… 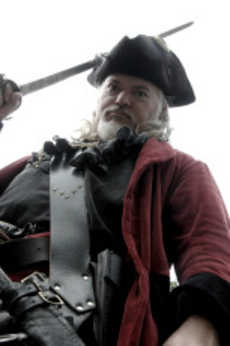 DK: Do you have a site for my readers to find out more about you?

I would like to thank William for taking the time to talk with me. I know he also does a segment called “Scalleywag of the Week”; on a weekly radio show, The Riggsby Report, on Mondays from 6-7pm on station AM 14.20. this is also streamed live on the internet at RibbsbyReport.com

Be sure to vote for Bill www.piratesmagazine.com Devil Dozen section.

Denise has freelanced in News and television production in Los Angeles and New York. She is popular with actors, actresses, directors, musicians and writers. Contact Denise through NewsBlaze.

ABOUT US
NewsBlaze is the alternative business and world news newspaper, with entertainment, music, politics, and the latest breaking news and videos.Visit the NewsBlaze Pressroom to see NewsBlaze in the News
Contact us: [email protected]e.com
FOLLOW US
© Copyright (c) 2004-2022 - NewsBlaze Pty. Ltd.
Go to mobile version