Overwhelmed? Need some help? Got Depression? Schizophrenia? Working too hard? Working too little? Attention too fixed on one thing? Attention not fixed on something? Sex drive too low? Sex drive too high? Traffic bugging you? Homework got you worried? Job got you down? Stressed about all those shootings? Smiling too much? Overly Happy? Qualified participants will receive study related medical care, experimental psych medication, and could be eligible for compensation for time and travel. Transportation is available. Call: 866-U-Die-Now. Funeral and body bag not included.

A pioneering figure in the development of minimal, conceptual, land art, and installation art, Walter De Maria has made minimalist horizontal sculptures that occupy entire rooms since 1969. Measuring 10 x 50 meters (approximately 33 x 164 feet), The 2000 Sculpture was first exhibited at the Kunsthaus Zurich in 1992. It is one of a series of works by De Maria featuring groupings of ordered elements using precise measurements. The 2000 Sculpture is currently on display at LACMA. Source: LACMA).

Stanley Kubrick, Art of the Americas Building, Level 2, November 1, 2012-June 30, 2013, at the Los Angeles Contemporary Museum of Art (LACMA): Stanley Kubrick was known for exerting complete artistic control over his projects; in doing so, he reconceived the genres in which he worked. The exhibition covers much of Mr. Kubrick’s practice, beginning with his early photographs for ‘Look’ magazine, taken in the 1940’s, and continuing with his groundbreaking directorial achievements of the 1950’s through the 1990’s.

His films are represented through a selection of annotated scripts, production photography, lenses and cameras, set models, costumes, and props. In addition, the exhibition explores ‘Napoleon’ and ‘The Aryan Papers’, two projects that Mr. Kubrick never completed, as well as the technological advances developed and utilized by Mr. Kubrick and his team. By featuring this legendary film auteur and his oeuvre as the focus of his first retrospective in the context of an art museum, the exhibition reevaluates how we define the artist in the 21st century, and simultaneously expands upon LACMA’s commitment to exploring the intersection of art and film. (Source: LACMA).

This is an outstanding show here, displaying the brilliance of Stanley Kubrick as a writer, researcher, photographer, director, storyteller, innovator, and ultimately, artist. Beginning and ending with a large room playing a near endless long loop of his motion picture works, visitors then follow a circular and looping path of different rooms in this exhibition. After the film screening room, we begin with the display of actual production packages by Mr. Kubrick. As a producer, seeing original executive summaries with line items for everything from ‘Christmas Cards,’ by Stanley Kubrick, got me as enthralled as studying Caravaggio next door.

Original scripts on display here have handwritten notes concerning some of Mr. Kubrick’s master works including ‘Lolita,’ ‘The ‘Shining,’ and others here, which is really great to see. Long display cases of Mr. Kubrick’s camera lenses are as exciting for any filmmaker to view here as it is for a car buff at the latest Corvette show. Each room here serves as an homage to a different film and its respective motif, from ‘2010 A Space Odyssey,’ to ‘Full Metal Jacket,’ and the most popular rooms of ‘The Shining,’ and ‘A Clockwork Orange’ among others. 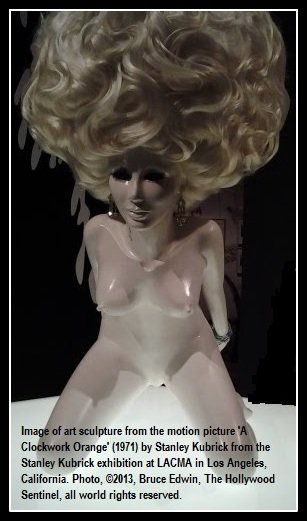 The ‘Clockwork Orange’ room saw some young adults during my visit here photographing the set design pieces like mad, as if they were seeing a rock star for the first time, and some even climbing on top of one of the pieces (pictured above), with one woman holding the bust of the female for her photographing companion to take a picture of she and it together. At this, a guard finally walked in to the room and declared, “Just what on Earth do you think you’re doing young lady?! Get off of that right now! What is wrong with you?! This is art! You don’t climb on this and touch it! This is art! Have you lost your mind?!” The woman and men duly blushed and quickly left the room.

Granted, these people went over the top, however, the pieces on the floor could be roped off and displayed in a safer manner for the work, with more space around it. While this guard was too late showing up in the room to catch this security breach, another (possibly Jamaican) guard in another exhibit was literally yelling at anyone that walked near another exhibit, even when they were far away from touching it and behind the roped or taped areas, with the artist-far less popular. Thankfully for the Clockwork Climber, the Jamaican lady wasn’t on her post there, or we would have surely seen some ultra-violence!

Despite these issues, the show was and is a great success, and well worth seeing not only once, but again. Stanley Kubrick, one of the most important filmmakers of all time- gets his much deserved recognition here among the great artists of the world, and it is an inspiration to see, continuing in the recent tradition of The Tim Burton Show, similarly shown here at LACMA and also at MoMA in New York last year. Film is indeed a noble art form, and worthy of the worlds’ greatest museums. LACMA is truly a treasure, and this- as my every visit here, is a highlight of my year which I will always love and remember. – b.e. 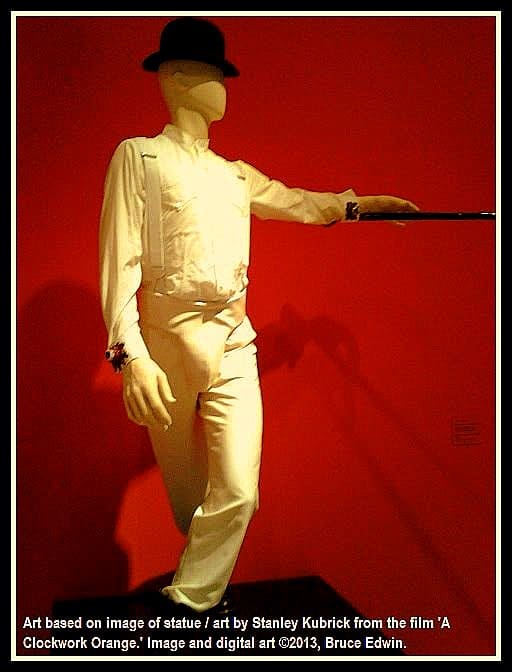 The Museum of Contemporary Art (MoCA) announces 2013 Acquisitions, including 117 significant objects added to museum’s renowned permanent collection through generous gifts and purchases. 2012 was an extraordinary year for gifts and new acquisitions to the MOCA collection, the museum reports. Several major works acquired have been presented in recent MOCA exhibitions, including the original storyboard for Kenneth Anger’s seminal film ‘Puce Moment,’ (…) said MoCA Director Jeffrey Deitch. Kenneth Anger, author of the renowned book ‘Hollywood Babylon’ among more, is a legendary and widely influential underground filmmaker who’s experimental and avant garde films have included stars including The Rolling Stones among others.

Furthermore, Mixed media installation, The Little Girl’s Room (1980) by Mike Kelley, which was presented in the 2011 MOCA exhibition, Under the Big Black Sun: California Art 1974-1981, was acquired as a gift of the late artist among more. In addition to his art work, Mike Kelley did album cover art for Sonic Youth, working heavily in the punk and New York underground art scene among more. MOCA is located at 250 South Grand Avenue in downtown Los Angeles.

This page of subnormal is anti-copyright, 2013, subnormal magazine, and may be reproduced if done in support of this story, with no commercial profit, and with a link of credit citing back to this site. The images on this page may not be reproduced. If you violate these terms, you will be waterboarded and forced to listen to Kenny G. for the rest of your life. subnormal magazine and its allies do not support any advertising that may appear on this page or in connection with this story.