It would appear as if my file on Yvette Vickers is complete. Yet I keep returning to the testimony of a neighbor, Susan Savage, startled by a mailbox brimmed with yellowing letters, and engulfed in gossamer cobwebs. Another image that sticks, is Susan peering into a broken window and seeing strands of blonde hair, that turned out to be a blonde wig.

Yes, the moving parts of the story are in place – there’s several bit roles in Cult B-Movies, there’s the Playboy pix shot by Russ Meyers, then there’s accounts of several sundry film festival guest appearances. But, let’s see, do you realize that 1959, when Yvette first appeared in Playboy, was 52 years ago? What was she doing all those years, watering her flowers in that spooky Beverly Hills domicile? 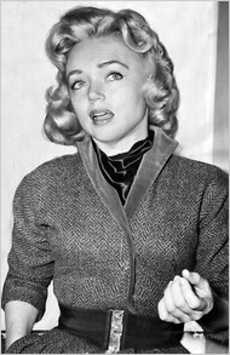 And how could Yvette have been dead in that house for 6 months to one year, and no one ever noticed? Yvette Vickers was completely alone. That’s what I conclude from reading these articles, that struggle to recall the last time she was seen alive. Perhaps the LA coroner can determine the time of death? Perhaps not.

Margaret Netcell, the operations manager at the Roy Rogers & Dale Evans Happy Trail Children’s Foundation in Apple Valley, Calif., last spoke to her last summer. Netcell called back several times, but got no answer. Neighbors hadn’t seen her since last April when Yvette returned from a trip to the East Coast. That would be one year ago. *(Note: Gardeners possibly spotted her last December or January.)

One thing they (I don’t know who they might be?) might do, is check the postal dates on those yellowing, unopened letters. The earliest letter would indicate approximately when Yvette stopped opening her door and grabbing her cornucopia of fan mail, which was never ending, in spite of her absolute isolation.

Many of us old geezers don’t have many around (either friends or family) anymore, except if you would think to include Facebook, but at least there’s still some living family or buddies who check up on us from time to time.

Take me for example, if the teeny retinue of fans of my writing were to notice a lack of inky typewriter adjectives spilling forth from my internet connection, they’d be tipped off that something is wrong! Might even call 911. Don’t know if it would go that far, though?

No cigar for a lost and forgotten film star, another Norma Desmond from a earlier era when Drive-In movies were King and Science Fiction mimicked the paranoia and terror of an Atomic Age, begot of a Cold War with the Soviet Union, where Mankind, as we know him/her, could vaporize in a poof of carnal dust with the push of a plastic red button.

My tale is a crack in the sidewalk. I’m reading between the lines in a half-dozen chronicles that portray poor, lonely Ms. Vickers as paranoid, possibly suffering from dementia, believing people were stalking her. Tom Weaver, a horror film historian, speculated, “Her downfall was paranoia and drinking – she chased away all her best friends.”

Don Prell, a jazz musician living in San Francisco, once was married to Yvette in the 1950s, but lost contact after their divorce. He last spoke to her two years ago when she requested newspaper clippings about their marriage. Don told ABC News just how independent and ambitious Yvette was back in those days.

I bet Yvette Vickers won’t be alone any more. Biographers will go through that old, disheveled spook house tooth and nail. Those ancient fan letters will be scanned and posted on the internet out of curiosity of millions. The movies will be sought out as collectors’ items and an original copy of the July 1959 Playboy, mint condition naturally, will fetch a pretty penny. No one will forget Yvette ever again, amen.