You may not recognize Jim Meskimen by name, but you are probably one of the over 80 million who heard his versions of the singing George W. Bush and John Kerry in Jibjab dot com’s viral hit, “This Land.” with his line of, “You’re a liberal weiner,” “You’re a right wing nut job…” Or watched him perform a Shakespeare speech from Richard III in 25 celebrity voices on YouTube. Yes, that guy!

Jim Meskimen’s show business bloodline begins with his mother- actress Marion Ross, whose beloved Emmy-nominated “Mrs. C” of Happy Days made her an icon of motherhood. Yet Jim is not only a stand up guy- but his stand up stands out on its own- with massive talent. He has been heard in animated cartoons and shows ranging from a dozen Jibjab political shorts, to impressions for The Tonight Show, Late Nite with David Letterman, and the Jimmy Kimmel show, to the subversively hilarious adult cartoon, The Boondocks among much more. 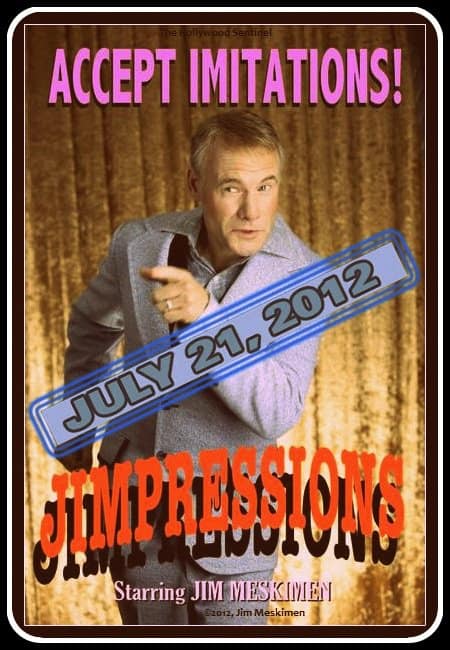 As an actor in live action projects, Jim has appeared in ‘Friends,’ ‘Rules of Engagement,’ ‘Parks & Recreation,’ and ‘Castle,’ as well as motion pictures ‘There Will Be Blood,’ and five films by the legendary director Ron Howard- including in the Academy award nominated films ‘Apollo 13’ and ‘Frost/Nixon.’ Jim was Will Smith’s college professor in a famous episode of ‘The Fresh Prince of Bel Air,’ where his imitations of Jack Nicholson, William Shatner, Robin Williams and others have delighted audiences in reruns ever since.

And further, to the delight of select audiences, Jim Meskimen now takes his prodigious improv and masterful mimicry to a new level at The Acting Center Theater in Hollywood, California in his one-man show, JIMPRESSIONS for a unique, exciting show on the date of Saturday, July 21st, 2012 at 8pm.

Consisting of a full hour of comedy, impressions, songs and stories from his career thus far, JIMPRESSIONS is full of celebrity voices- over 75 in the entire evening- presented in a funny retro 70’s vibe, complete with white shoes and bell bottom suit pants, as he pays homage to mimics Rich Little, Frank Gorshin and other greats. The response to JIMPRESSIONS has been nothing short of sensational.

The Firesign Theatre’s Phil Proctor calls Jim Meskimen “A vocal magician who pulls characters out of his head – and even more amazing, like Penn & Teller, Jim shows us how he does it.”

“The greatest impressionist of these times,” hails Scott Simon, of NPR’s Weekend Edition.

Impressionist for the Craig Ferguson and Howard Stern shows, Josh Robert Thompson describes JIMPRESSIONS as, “Staggering genius. That’s all there is to it.”

Talent Manager and Producer Bruce Edwin states, “Jim Meskimen is absolute genius talent, and one of the best comics of our time.”

Jim Meskimen says about his own show, “It’s designed to do three things, demonstrate my infinity of voices, inspire people to create and enjoy life, and to be 60 minutes of face-hurt-from-laughing hilarity. So far, that’s exactly what people are telling me they come away with.” The “face-hurt” goes away the next day. The rest of the show will stay with you. See

And, to see even more of Jim’s brilliant work in action that will prove to you why you must see his show now, watch this clip her below now at;