The Diceman Returneth… and Offendeth

It’s almost heartwarming to see that after all these years, Tabloid Baby pal Andrew “Dice” Clay can still get out of bed and offend an entire city without even trying.

The comic, who by the way had a very sweet comedic reality show on VH1 last year, was being interviewed on the KTLA Morning Show by Tabloid Baby pal Sam Rubin this morning to promote his engagement at the Grove of Anaheim this Saturday, when he went into a routine about Blackberry devices. 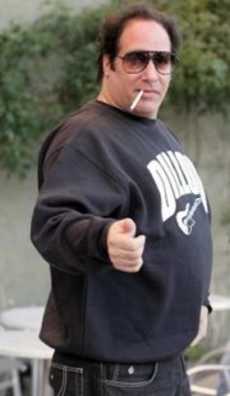 Whoa! Just so happens that Dice was sitting between Sam… and hostess Michaela Pereira, who happens to a Canadian of Afro-Portuguese extraction… who also just happened to be sitting on a very large… well, you get the picture.

Whoa! Sources tell us the tension on the set was thicker than… you get that as well. Before the show ended, producers had issued an apology on air, reminding viewers that folks who go to Dice shows know what to expect, but that there’s no place for such imagery on a morning show.

We guess Dice was trying to be as offensive as he was back in February at the The Pollstar Awards, as can be seen here in a NSFW link. Nice reality show, though.

See How Much More Offensive Andrew “Dice” Clay Can Get When He Performs at the Grove of Anaheim This Saturday, June 21 at 8 Pm!