As Williamsburg experiences a renaissance of music, art and individual expression, an ever growing community still clings to tradition, remembers and honors a fourth century act of sacrifice and courage. For 121 years, Brooklyn Italians have celebrated the Feast of San Paolino di Nola. But everyone can relate to the message that this memorial celebration represents. The lesson crosses all ethnic boundaries, and everyone is invited. 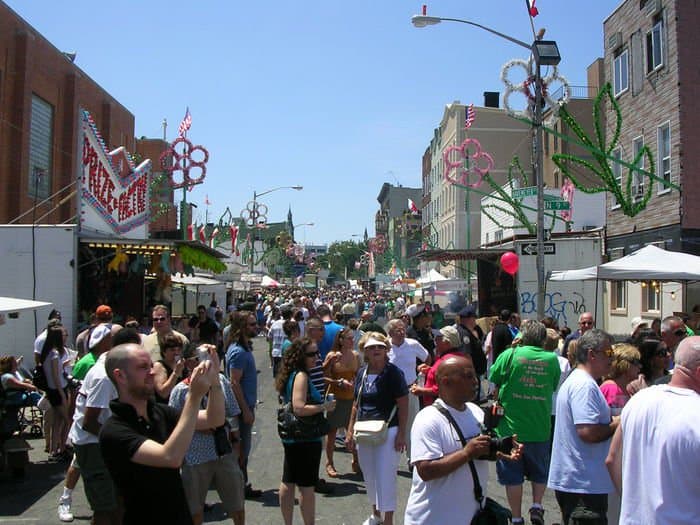 “The story, which is passed on through the generations on both sides of the Atlantic, is that around 410 AD, North African pirates overran the town of Nola. In the chaos, Bishop Paolino was able to flee into the countryside with some of the children. Upon his return, Paolino learned, from a sobbing widow that many of the young men, her son included, had been abducted into slavery. Moved to compassion, Paolino offered himself in exchange for the boy and was ferried off, a prisoner of the brigands. While in North Africa, word of the courage and self-sacrifice of Paolino spread and became known to a certain Turkish sultan. Taken with the tale of altruism, the sultan intervened, negotiating for the freedom of this holy man. Through the sultan’s efforts, Paolino and his paesani, were freed.”

(A detailed version of the story and Feast schedule can be found at: Our Lady of Mount Carmel Feast http://www.olmcfeast.com/)

The Williamsburg community continues to celebrate good deeds with good times through a reenactment of Paulino’s return from slavery. On Sunday July 13, began the Dance of the Giglio (Dance of the Lilies, which represent purity and innocence), and a replica of his return ship, The Boat.

While melting street tar removed many a sandal and slipper, July heat not withstanding, a mass of onlookers await for the exhilarating moment, comforted by a cool, dry breeze and the anticipation of the spectacle to come. Street vendors drop their awnings, the road too narrow for the ceremony ahead. Apartment windows fling open. Easily seen from the elevated Brooklyn-Queens Expressway, the Giglio Tower stands 72′ tall. Spectators fill every available space for a close-up view, while children sit atop their parent’s shoulders. The national anthem, a few acknowledgments and a blessing, then, the rhythmic clapping starts as a band begins playing Italian folk music. Amid the waving and bouncing multitude, the cheers go up “Bravo” as 150 men raise the 4 to 5 ton tower, brass band, pastor and all. A few blocks away at the other end of Havemeyer Street, music is heard as The Boat goes up. At intervals, the lifters (Paranza), turn, drop and raise the immense structures as they carry them through the crowded streets to meet at a central intersection.

The story of Paulino di Nola is worth sharing. Dance of the Giglio, dance of life, honors character and society. Building these values never fades-out of fashion as the 121st annual summer festival at “Our Lady of Mount Carmel” demonstrates. The message includes family. We measure ourselves and our society by what we cherish and hold dear, the ideals and virtues we live by and pass along to our children.