Half an hour before Julian Schnabel was scheduled to begin his curatorial lecture on the solo Dennis Hopper retrospective in the little Tokyo MOCA (Museum of Contemporary Art), a line stretched out the door and around the corner. To amuse the crowd at the front of the line, a gallery attendant demonstrated a performance utilizing a Chris Burden sculpture, wherein a stationary motorcycle was ridden, and the wheels on the bike provided enough energy to turn an over-sized iron wheel that looked to weigh as much as a compact car. Light applause followed. 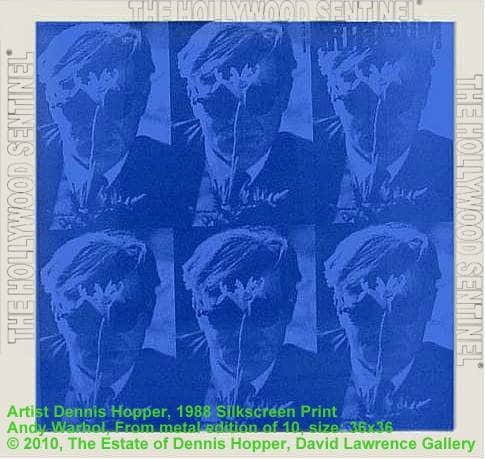 Schnabel’s reputation preceded him: as a larger than life character, darling of the 80’s art boom, and one of the few artists to successfully break into Hollywood, notably directing 2007’s “The Diving Bell and the Butterfly,” which was nominated for 4 Oscars, and having just directed William Dafoe, Freida Pinto, and Vanessa Redgrave in “Miral,” a chronicle of Hind Husseini’s effort to establish an orphanage in Jerusalem after the 1948 partition of Palestine and the creation of the state of Israel.

I had heard that Schnabel wore his pajamas in public, but I was still mildly shocked when he arrived, at the top of the stairs, bare-chested and wearing what could euphemistically be described as a navy “leisure suit” with white piping. The crowd was so thick that he couldn’t pass through the top of the stairs. Although he had intended the intimate type of gallery walk wherein a curator and small group of aficionados stroll from canvas to canvas, he was forced to address several hundred of us in the front gallery from an elevated position in the entry.

Schnabel began with Hopper’s own words, reciting a poem Hopper had written about his boyhood in Kansas, and every one was a little spooked when a series of noises disrupted the poem; an alarm probably set off by some one standing too close to a sculpture and the strange groaning of a what I guess was the plumbing system led Schnabel to quip, “He’s with us now.” And in image, at least, he was. For Hopper’s own visage stared at us in polymer resin, as a near to life sized black and white cowboy, standing in an island of too limey green Sequoias, and also in monumental canvases reproduced from his photographs, in which he documented his fascination with and friendship with artists such as Warhol and Lichtenstein, founders of Pop.

Schnabel’s magnanimous attitude characterized his description of the work; he emphasized Hopper as a Conceptual artist although most everyone else would likely see him as an actor who brought in his naturally mimetic qualities to work that varied from Abstract Expressionist to Dada to Photorealist influences. Though I agree that the work is conceptually grounded, and I was impressed to learn that Hopper had even met Duchamp, I think that Hopper was too invested in object making to really qualify as a Conceptualist in the more frequently used definition of the term within the art lexicon. But I’m just parsing semantics.

Schnabel, after all, is known as an iconoclast, and listening to him speak, it was clear he had no qualms about using his curatorial might to benefit an old friend, that he was the type of guy who would stand up for those he cares for and feel no sense of embarrassment. He stated that Hopper “painted his own paintings,” yet elsewhere I read that Hopper’s larger work, blown up reproductions of Hopper’s photos, had been painted by hired hands. It would seem that Hopper painted some of his own paintings. The large scale sculptures, which reference the ubiquitous kitsch of the California highways, were also fabricated by others under Hopper’s supervision. That hardly makes him any different than Hirsch, Murakami, or Koons. Except perhaps it seems to some, doubly unfair, that Hopper has crossed posthumously from Hollywood into the type of canonization that a solo retrospective in a major metropolitan museum almost guarantees: the two machines, the two star systems, seemingly much farther apart than the 2462 miles between their respective epicenters in New York and Los Angeles.

There’s something of a jealous tinge to some of the negative reviews of Hopper’s work. But that’s life. It isn’t easy, and it isn’t fair. And when you win too many games people will assume, perhaps themselves unfairly, that you’ve cheated. So I recommend trying not to think “this is a movie star” you go see the show, and try to approach it with an open mind. At the same time, the types of decisions that Hopper makes, which Schnabel calls “conceptual” I would say come from being an actor who is also an artist. While the art marketing machine pushes artists to create a sort of “identity” or association and loyalty to a particular school of thought or movement, and then repeat endless variations upon their signature, as an actor, Hopper seemed to have felt a freedom o play various roles as an artist in a way that artists coming from academia are discouraged to explore. I feel that is the other reason for some of the harsh critiques. He’s not playing by the same (unwritten, unspoken) rules.

At the close of Schnabel’s lecture, the highly esteemed abstract painter Ed Moses, who was also in attendance, said that Hopper’s real legacy was “Easy Rider” and “Blue Velvet.” Schnabel, of course, disagreed. History, I believe, will redeem what is beautiful, and what is true. Where does Hopper’s work fall into either category? Why don’t you go see for yourself, and draw your own conclusion?

Over 200 Dennis Hopper works are on display at the Museum of Contemporary Art Geffen Center from July 11 to September 26, 2010. His work is represented in New York by the Tony Shafrazi Gallery and in Los Angeles by David Lawrence Gallery.