Simon Cowell may not be the most liked person on television, but in truth he is just a guy who very effectively uses a “tabloid” approach to TV shows, you could say “he knows how to sell papers.”

The public have been glued to their TV sets in their millions, perhaps openly showing disgust at the cruelty of it all, but secretly enjoying every painful moment.

With the greatest respect to those who took part, it was not their abilities that the public sat down to see, but the emotional reactions they displayed when being judged. Let’s be honest, we have all seen better acts in our local clubs.

There has been a great deal of criticism about allowing children onto the talent show, and even Cowell was quoted as saying “the events had really made him think about having children on the show.”

In the run-up to the final we saw Aidan Davis, a 12-year-old street dancer in tears, and then the agony of 10 year old Hollie Steel, who also broke down in tears after forgetting the words of the song. After watching the poor kid in hysterics for several minutes, she was eventually given a second chance. 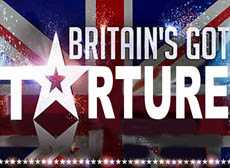 And what of the hot favourite for the show, Susan Boyle? She was clearly finding it difficult to perform in the final and her face said it all (giving the impression she was on the verge of a nervous breakdown). Her whole body was visibly shaking as she awaited the final result and almost seemed relieved when the result went to the dance group Diversity (deserved winners I might add).

The Media, who helped to make Boyle a household name worldwide by promoting her singing talent, very quickly turned on her and should share the blame for her present situation. It has been suggested that Susan Boyle should have been psychologically tested by producers before she was allowed onto the show and that she has learning difficulties after being starved of oxygen at birth.

It was perhaps fairly clear from Boyle’s first appearance on the talent show that she was not exactly a candidate for Mastermind (I mean that in the nicest possible way), and perhaps the producers chose to ignore this factor because they felt it would make “good television”?

Despite Boyle’s alleged “learning difficulties,” she still has a wonderful voice and deserved the chance of success the same as anyone else. The problem is not about the contestants, but the way in which they are judged.

If the Britain’s Got Talent show was run in much the same way as an earlier show called “Opportunity Knocks,” there wouldn’t be any of the complaints we are seeing at the moment.

The host of Opportunity Knocks, Hughie Green, would never have been so critical as to have kids crying on stage, and the viewers decided who should win (they were the judges).

Sadly, it is the public that allow shows like BGT to do the things they do by watching it, and people like Simon Cowell are simply giving the public what they secretly crave for (and making a fortune from it at the same time).

The public have always had a morbid interest in torture and this goes back thousands of years (throwing people in an arena with lions, hangings, beheadings, floggings etc.). If you were to place a video on the internet showing a violent act to another human being (as many do), you can guarantee it would receive a huge amount of hits.

Britain’s Got Talent follows an age old tradition of making torture a form of entertainment, and there is no shortage of people looking to satisfy their lust by watching it. Some things never change!