NewsBlaze News
Home Entertainment Features Actor With a Cause: Kurt Caceres Gets ‘Down for Life (por Vida)’

An Actor With a Cause: Kurt Caceres Gets “Down for Life (por Vida)” With a World Premiere At The Toronto Film Festival

A long way from his San Francisco Corporate days first programming games for Electronic arts and EA sports, then being a network administrator for the Bay Meadows company, a horse racing track in San Mateo, Kurt Caceres admits that after one acting class he was hooked!

Yet Caceres caught the acting bug sort of by default! He graduated from Napa High School as a standout All League football player and received a football scholarship to Sacramento State. But to graduate Caceres was forced to take a drama class to complete his curriculum – a major faux pas for the school jock who certainly chanced being mocked by his football team mates. While Kurt’s first plays were musicals (Cat &West Side Story), he succeeded in earning the respect of his peers in each of the three communities he was involved in – the fraternity, the drama school and the football team – crossing different worlds together and bridging the gap of social, racial and ethnic barriers.

But the bold and risky change obviously paid off! Now Caceres who co-stars in the much talked about Alan Jacobs’ feature film “Down for Life (Por Vida)” readies for the world premiere at the 2009 Toronto Film Festival (Sept 10-19).

Based on a true story, Down For Life is an English/Spanish language urban drama – reminiscent of films such as ‘Maria Full of Grace’, and ‘Boyz N the Hood’ – starring Snoop Dogg, Danny Glover, Elizabeth Pena, Kate Dl Castillo and Kurt Caceres. 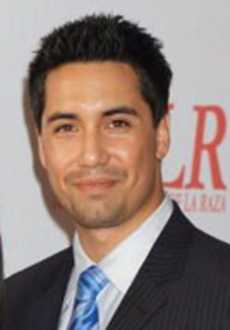 Written by Juxtapoz contributing writer Trina Calderon, Down For Life is based on a New York Times article depicting a single dramatic day in the life of a Latina gang leader in South Central L.A. Covering gang life in Los Angeles, the film features a 15-year old Jessica Romero, a “non-actress” who actually led the gang life and attempted to leave. Set in LA’s notorious South Central district, the film is a powerful and unflinching look at a world most of us know little about yet it is grounded with a sense of hope that a mainstream audience can relate to: there is a better life out there, if you are willing to fight for it. Riveting, painful and disconcerting in its jagged reality, Down for Life is based on a true story and takes place over the course of one urgent day.

Caceres plays the breakthrough role of “Rafael” – the step-father of the Latina gang leader who tries to instill, at times through force and violence, some reason and sense of responsibility in this main character. This was quite a challenging role for Caceres who had to act opposite authentic street kids with no prior acting experience – he confesses he often times had to resort to a different kind of acting technique to provoke the actors by whispering something in their ears that would push their buttons to make them be themselves and forget about the cameras.

Caceres was born and raised in the Wine Country of Napa Valley in Northern California. His mother came from Mexico City to the states for college when she was 17 years old, and eventually met his father a California native of German heritage. He graduated with a degree in Business Administration (MIS) and Theatre Arts, as well as being a member of the prestigious Phi Delta Theta fraternity which includes the likes of Burt Reynolds and Louis Armstrong. After graduation he moved back to the bay area, lived in San Francisco and worked in the corporate world.

A political and environmental activist, who’s main fight is to preserve the Earth and her many endangered animals and wildlife sanctuaries, he is also an avid participant and supporter of the USO and the National Hispanic Foundation for the arts in Washington DC. An organization started by Jimmy Smits, Esai Morales and Sonia Braga, run by a high powered attorney and supported by top Congress and Senate member which reaches out to the youth in this country to provide scholarships and outlets for higher education in the arts.

Kurt also was a volunteer teacher and actor for Tony Planas East LA Classic theatre for almost 10 years. Going to inner city neighborhoods of Los Angeles and exposing children who had never seen a play in their life, to Shakespeare. Kurt would go into the schools during the week and teach and explain Shakespeare, then at the end of the week, Tony’s company would put on a full stage production for thousands of children bused in from around greater Los Angeles to large venues for the show.

He is best known for his role as Hector Avila on the hit Fox drama Prison Break and has been regularly recurring on this year on the TV show “Ghost Whisperer” as Detective Carl Neely. His other film credits include “The Closer,” “CSI,” “The Shield,” “Numb3rs” and ” Dollhouse, to name a few. He also stars in the video game in the Need for Speed franchise Takedown as Hector Maio a street racer/car thief. He also recently completed the feature fim “Drive-By-Chronicle: Sidewayz” recipient of a 2009 Imagen Awards nomination.