As Tony Blair arrived in Dublin for the first public signing of his memoirs, he was met by around 200 protestors. Security had to shield Blair as some of the crowd threw shoes and eggs at him, but none landed on target.

One of the protestors, 24-year-old Kate O’Sullivan from Cork, managed to enter the bookstore where Blair was signing copies of his book, and after receiving a signed copy announced to Tony Blair “‘Mr Blair, I’m here to make a citizen’s arrest for the war crimes that you’ve committed.”

She was immediately grabbed by five security people, who dragged her off. As she was being led away she cried out, “there was half a million people dead in Iraq, how can you live with yourself, you’ve committed war crimes.” 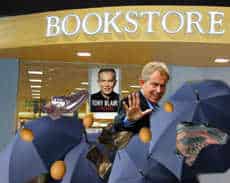 The rules for making a Citizen’s Arrest differs depending on the country you are in and is a practice that dates back to medieval Britain and the English common law, in which sheriffs encouraged ordinary citizens to help apprehend law breakers.

Unfortunately, this practice has one common factor when used by the public, it doesn’t work! Yet despite the authorities’ determination to ignore this old (but legal) action, the public still continue to try and arrest well known figures like Tony Blair and others. Perhaps the government can explain why this practice no longer has a function?

Whilst you have to admire the courage of Kate O’Sullivan, the chances of success was always going to be slim. Much more influential people have tried to bring Tony Blair (and George Bush) to court to face charges of war crimes for years, but the system they helped to create protects them too well.

People like Blair, Bush, Cheney, Obama and friends are the modern day “Untouchables,” but unlike Ness’ agents, they work on the “other” side and have a very different agenda!