In her most recent book The Ostrich Wakes: Struggles for Change in Highland Kenya (Kirinyaga Publishers, Texas, 2006), American anthropologist Jean Davison updates the readers on the social change in the Kenyan highland as observed by her in the role of Kenyan women in their social life and individual viewpoint.

Jean has formed a warm connection with many Kenyan women as she spent a good deal of time there, doing research on Kenyan culture, especially in the rural side of Kenya where plantation of tea has taken over that of coffee.

The Ostrich Wakes is Jean’s first-person account of her latest return to the Kenyan highland, inspired by the feeling of ‘Africa… calling me back’. Jean tells about the family histories of several Kenyan women, their courage, steadfastness, and efforts for making things better against the odds of subjugation, ignorance and poverty.

She allows these women of color to describe their cultural journey out of the unhealthy practices of female circumcision and ruracio-transfer of wealth from the groom’s family to that of the bride as a sign of respect for the bride’s family. 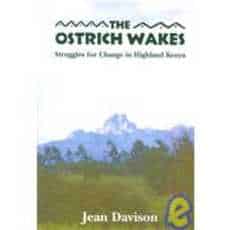 Jean Davison’s book reveals signs of hope about the future of Kenyan women as she pens down the increasing respect for women, their entrance into government offices, and their increased awareness of the importance of education as well as of their own individuality. At the same time, however, The Ostrich Wakes expresses concern over the persistent hush on the AIDS issue.

This is where the author’s use of the metaphor of ‘Ostrich’ imparts practical meaning. Most Kenyan women and men still appear to cower away from the threat of AIDS that is anything but rare in the whole of Africa. The Ostrich Wakes signifies that the waking process of the Kenyan consciousness has not yet attained the readiness of opening eyes to see everything clearly. It is just the beginning.