When thinking of charismatic speakers we recognize they must inspire, captivate, and deliver a message which enthralls their audiences. Kurt W. Mortensen brings 20 years of experience into his latest book “The Laws of Charisma,” which is a self-learning tool in laying the foundation for obtaining charisma.

Kurt Mortensen is one of the world’s leading authorities on persuasion, motivation, and influence and has made presentations with some of the outstanding motivational speakers such as Brian Tracy, Mark Victor Hansen, Tom Hopkins, and Les Brown. ” He also wrote “Maximum Influence and Persuasion IQ.”

This book embodies the spirit of all who have demonstrated outstanding charisma. There are 30 steps to achieve the harnessing of your innate power to become more influential, successful, respected, cherished and fulfilled. “Respect” is one example which is followed by several other application caveats:”

* Be grateful to others.”

Throughout his presentation Mortensen builds upon a clear and concise formula for the reader to recognize these 30 elements by providing examples of outstanding charismatic people who have been able to lead by example. Outstanding powerhouses such as Bill Clinton, Winston Churchill, and Dr. Martin Luther King, Jr. are held up as being the type of people to emulate in the formulation of achieving individual charisma. When discussing “Eye Contact” Clinton was exemplified with the fact that “His gaze makes you feel in awe and comfortable at the same time.” 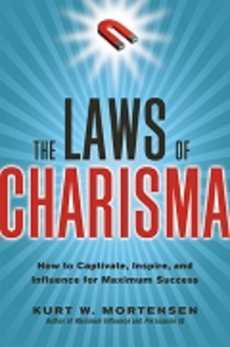 Another of the elements discussed is “MOTIVATION: Light their Fire,” and in Mortensen’s straightforward style a quotation by a charismatic person is given to demonstrate his point: “Motivation is the art of getting people to do what you want them to do because they want to do it.” -Dwight D. Eisenhower In this section to further emphasize how to achieve the utilization of this technique, Mortensen describes pitfalls in his term “Blind Spot,” how to achieve by his “Application.” He further gives an “Example” and then summarizes with his “Charisma Key” where he has the readers rate themselves on a scale from 1 to 10 with regard to this Chapter.

Many other traits of charisma are discussed such as “Confidence,” “Positive Power,” “Courage,” “Credibility,” and “Goodwill.” These and the others which make up the cornerstones of achieving a better personal radiance and the same pattern is followed in each section of the book.

This is an excellent self-help hardback which will aid in the pursuit of being more successful people. Many books attempt to improve people’s lives, but what makes this book outstanding is the manner in which it approaches those elements that can improve managerial skills, better customer relations, and the foundation to persuade in a positive way. Follow the simple lessons and you can’t help but improve your career and interpersonal relationships. “The Laws of Charisma” is highly recommended.

2. Fall of Giants: First in the Century Trilogy Ken Follett;

4. The Girl Who Kicked the Hornet’s Nest Stieg Larsson , trans. from the Swedish by Reg Keeland;

The Laws of Charisma How to Captivate, Inspire, and Influence for Maximum Success

Clark Isaacs is an accomplished book critic who is published in local newspapers and national book review lists. He also is a faculty member of Mohave Community College in Kingman Arizona. Visit Clark Isaacs at http://clarkisaacs.ning.com and tell him what you would like to have him write about.

Clark Isaacs is an accomplished book critic who is published in local newspapers and national book review lists. Contact Clark through his website at clarkisaacs.ning.com or through NewsBlaze.