When it comes to “Ghostbusters,” Nigel Brockwell is the real thing and has been investigating this phenomenon for a very long time. Using the most sophisticated equipment (which he designs himself), he is able to detect the most subtle vibrations and changes in temperatures, and even unusual radio waves when investigating the possible presence of ghosts.

In December 2006 he took part in an investigation of Chicksands Priory, which is located in Shefford, Bedfordshire.

The Priory has a very long history and receives a mention in the Doomsday Survey of 1086. The Priory originally consisted of a pair of adjacent cloisters – one for men and one for women – with a dividing wall. Thomas a Becket, as Archbishop of Canterbury, took refuge in Chicksands in 1164 disguised as a canon. 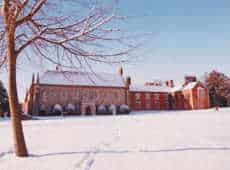 As you would expect with a location that has such a long history, there are stories of strange events. One such story relates to a report by the lawyer’s of King Henry VIII, of a walled-up disgraced nun whose ghost still haunts the Priory to this day.

Chicksands Priory has changed hands many times over the centuries, and in 1995 was acquired by the Ministry of Defence as a Joint Services Base. Prior to this it was used by the US Air Force.

Nigel’s investigation of Chicksands Priory was carried out over two nights and he provided the following report (a diagram of the location investigated is also displayed below):

“This is part of my report of the apparition I saw in a fully lit hallway… after finishing our investigation of the Attic/Stairs, including Room 4, around 3.45am on the 29th, we made our way back to the Base Room.

Having stayed longer than our allotted time of an hour, all other group members would have returned by now. The Pigeon Room was very dark, until opening the door to the illuminated Hallway and stairs at the other end.

Upon reaching the stairs I let the two Staff women and then Louise (Medium) go ahead first. I put my foot on the top step and decided to look back down the Hallway. This is when I noticed a dark shape like a figure, but no facial or leg features could be seen. The figure would have been taller than me, making it about 5′ 8″ to 6′ tall. The figure travelled from right to left at a fast walking speed. I was able to see this apparition for about 1.5 seconds, of which 0.5 seconds was lost while turning my head towards that direction. I believe the figure had been wearing a full gown or robe, and it was for this reason no facial or leg features could be seen. As the figure moved, the gown or robe did not appear to move in the leg area, which I found strange. The figure must have been of a solid form because I was unable to see the door at the far end of the Hallway through it.

I came back to where the figure had moved, only to find nothing there, the door it was heading for was still closed and the sound of a door closing could not be heard. The direction it had come from was a solid wall? Later reports from two other members of the group also described the same figure, but at different times and locations.”

Nigel receives many requests to investigate “haunted” locations (and enquiries about the equipment he uses), so he is kept very busy. However, if you know of a place that you think might be of special interest to him (especially in the Hertfordshire area UK), please let me know and I will forward your request to him.

Watch out for further articles on this subject. Have you got a story to tell? Why not write in and share it with us.