There’s no looking back is what instantiates the professional engagements of Judyth Piazza who, after years of prominence in journalism and online media, is now close to publishing her first book. What intrigues her fans and listeners is that she is keeping the book’s name a secret!

Judyth Piazza, whose popular online radio show The American Perspective is enjoyed by thousands of people around the world, has put together select interviews from her show’s archives and is publishing these along with her success story as a journalist as well as her health and fitness routine. The interviews included in the book present the success stories of people who have marked achievement in their respective fields and are not hesitant in sharing their success stories. An exciting feature of the book is that interested readers will have the opportunity to listen to audio files of each interview by visiting her show’s online archives. 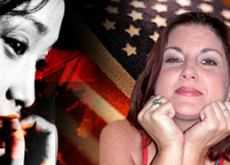 ‘Success’ is the theme of Judyth Piazza’s coming book, as she tells about it. Asked who will find her book interesting, she said, “Anyone who is interested in succeeding so I would say everyone that has a passion for something.” Judyth’s concept of success is broad and open. She looks at success as having no age limit and where it is never too early or too late to chase one’s dreams.

Expected to be released around the end of June 2011, Judyth Piazza’s book has many interesting images of her and her guests on the show. The book will be published by Von Chase Publishing as both an e-book and in traditional print format.

“I am planning to do several book signing events that are yet to be scheduled,” tells the journalist-cum-author whose charisma as a journalist and radio talk show host has won her thousands of fans over the globe. Many of them will be thrilled to learn that their favorite Judyth Piazza will also be offering “autographed copies of the book” all this summer on Judyth Piazza’s authorial debut!