Knowing about our Seals is still very important as there are many brave men who dedicate their lives to our freedom and protection.

Osama Ben Laden’s death which was attributed to the fortitude and courage of the Seals in their mission against him, brought a lot more interest into the question, “Who are the Navy Seals?” This book is the answer!

Modern warfare has created a more sophisticated and dedicated elite fighter, who has unbelievable skills, utilized every day in combat. World War II had Underwater Demolition Technicians (UDT) and these brave men were replaced by inclusion of new duties performed as U S Navy SEALS, (SEa, Air and Land) which refers to methods of insertion and ability to perform missions in these environments. 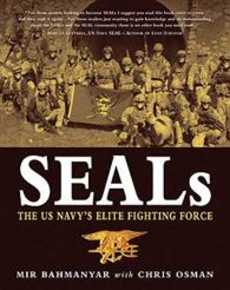 Training of high caliber crusaders is extremely complex and rigorous. Those who go through the initial training phase called BUD/S find that the attrition rate is 75 to 80%. This is a 6 month training cycle followed by 6 months probation before receiving the Navy Special Operations designation, the Budweiser (Trident). This is only the start as they go on to further cycles such as Jump School, HALO training, Ranger Training, Army Special Forces training, and SERE (Survival, Evasion, Resistance, E scape). The class of 1989 donated a class gift as a motto for UDT/Seal Training “The only easy day was yesterday.”

Interviews with Seals point out that before 9/11, these men were in a readiness limited- combat-status. Since 9/11 they have served gallantly and with distinction. Many medals have been awarded such as the Congressional Medal of Honor and heroics of the recipients are discussed with reverence in explicit detail.

Comments are intended to persuade young people to consider this elite fighting force as a career. However, becoming a SEAL has drawbacks, dangers, and rewards. In fact, Seal’s recommend this book to those who want the military for their life’s ambition. An informed decision is necessary before attempting to become a member of the over 15,000 who make up the history of this unique team.

Few realize fighting currently taking place in Iraq and Afghanistan has been led by Navy Seals in positions of high risk where they are called upon first to be snipers securing areas which then can be occupied by Marine and Army personnel! This is a high-risk profession for men only. There are no women in the SEALs as it is too dangerous for them.

A surprising concluding statement ends with “Almost all the Navy SEALs believe that the United States cannot win the war on terrorism. Not one offered a solution.”

Further, “There is no magic ball to foretell the future. Americans can take pride in their armed forces who have always served their country faithfully. Our soldiers, sailors, Marines, and airmen are not only warriors but are also our ambassadors and we ought to remember that no military can win any war without clear-cut political objectives.”