“For at least 30 years, the wealthy and privileged have been rigging the system to acquire more wealth and privilege. At this point, 400 families control more wealth than 180 million Americans…

As a result, the very idea of the American Dream has become a cruel joke to millions who are working harder than ever and falling further behind… In our system, everyone should have a shot at pursuing her or his dreams-and hard work should pay off…

The aim… is to prepare citizens at the grassroots level to see their own power differently-and to exercise their own leadership more boldly.” – Excerpted from the Introduction (pages 2-8) 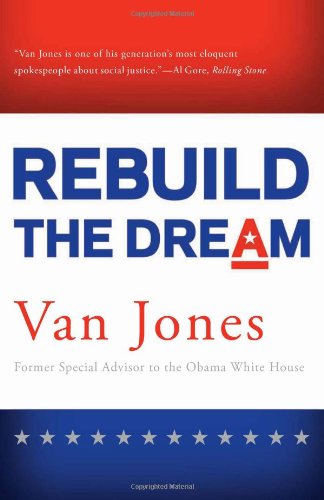 Just because President Obama has been re-elected is no reason to presume that the concerns of the constituents who put him back in office will be addressed. After all, he garnered over 90% of the black vote before, yet failed to deliver much in the way of the promised change.

Yes, the Republicans who openly admitted that their mission was to make sure his first term was a failure deserve a big share of the blame. But so do the masses of American citizens who failed to attempt to hold him accountable.

That is the contention of Van Jones, who feels that for democracy to work it is incumbent upon a grassroots movement of millions to pressure the President to act in their interest. You may remember Jones as the Yale Law School grad who served briefly as the Obama Administration’s green energy czar, until he resigned from the post after becoming the target of a relentless, right-wing smear campaign labeling him as a radical.

In his book, Rebuild the Dream, Van examines both the Tea Party and Occupy Wall Street movements en route to proposing possible pathways for rescuing the 99% of the population being ignored down on Main Street. The author fervently feels that sovereignty resides in the people, and that it’s up to us to resurrect the American Dream by wresting power back from the wealthy fat cats who have effectively bought the votes of governors and members of Congress.

Jones closes with a clarion call “for the next generation of deep patriots to step forward” and lead via a combination of “organizing, teach-ins, online petitions, rallies, creative events, viral digital projects, and traditional media.” One can only hope that his inspirational ideas do motivate a generally passive populace to a 21st Century activism.

The sensible and intelligent rallying cry of an inveterate progressive blessed with an Ivy League pedigree.