Prisoners of Geography, a book by Tim Marshall

(Politicians operate within the confines of geography).

To understand a political event or a sudden development, a revolution, turmoil, or a major upheaval in a country, you need to know the geography of the country which puts the event in some kind of context. Geography enhances our appreciation of the impact of embargoes, sanctions and even military operations. In his book “Prisoners of Geography” Tim Marshall examines the complex global geopolitical issues which are impacted by geography and the strategic issues which are influenced by geography.

Geography can facilitate conquest, trade and even smuggling. Geography can impede political and economic development. It can protect countries against external invasion.

Geography has played a critical role in shaping Russia and its relations with its neighbours. Russian geography and climate frustrated Hitler and defeated the Nazis. 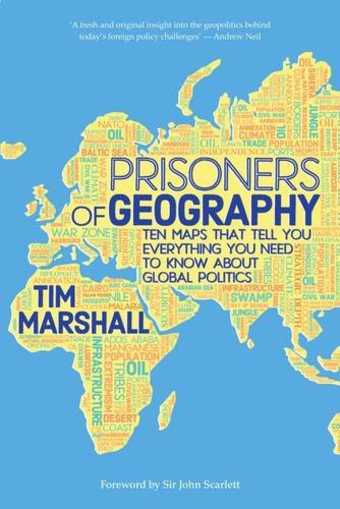 In 1812 Russia’s vastness and bad weather helped to defeat Napoleon. Even now it is a massive task for an invading army just to maintain their supply lines. The further they got into the country, the harder it becomes to keep food, fuel, ammunition flowing. Hitler discovered such realities in 1941. It was easy for Hitler to ponder a map with his commanders, but it is something else to traverse the boundless frozen wastes of Russia.

The vastness created logistical problems including worn out foot soldiers and dangerously overstretched supply lines. It also taxed the ability of the Luftwaffe to provide close cover for advancing ground troops, a vital ingredient in the Blitzkrieg formula which Germany had applied elsewhere in Europe.

Such examples underline the importance of Geography. In his book “Prisoners of Geography” Tim Marshall analyses the relationship between geography of a country or a continent and its economic, political development and relations with its neighbours.

The book is divided into 10 chapters covering the entire world as we know it. For example there is a chapter about the Arctic and one about the Middle East, chapter 1 is about Russia and 7 is about India and Pakistan.

The question of Geography is starkly reflected in the conflict in Syria. It is not just a war between rebels and a tyrannical regime, but between the Alawites in the Western mountainous coastal areas and the Sunnis in the East and North of the country.

Another example is Iraq where Sunnis are concentrated in central and eastern areas, Kurds in the north and Shiites in the South. Since the fall of Saddam Hussein in 2003 the tribal war has not stopped. If we add Iran’s meddling and the emergence of ISIS, the ingredients for disaster are already in place. The oil resources happen to be located in Kurdish and Shiite areas and the Sunnis are fighting for a share in the wealth.

Moving eastward to India and Pakistan, Kashmir remains a source of tension and war. Further East to China where the Himalayas separate India from China which made military confrontation unlikely despite a limited war in the early 1960s. Even the iconic Great Wall of China was built to protect China from Northern invaders.

Geography Not Always A Barrier

Although geography can provide protection from invaders, it can also be argued that throughout history, geography had not always stopped war.

Vast Ocean didn’t prevent Japan from destroying the American naval base at Pearl Harbour. On 7th December 1941 no one believed that the Japanese would start that war with an attack on American territory. For one thing, it would be logistically difficult. Hawaii and Japan were about 4,000 miles apart.

On 2nd April 1982, Argentina invaded the Falkland Islands, a remote UK colony in the South Atlantic. The UK, which had ruled the islands for 150 years, quickly chose to fight. Prime Minister Margaret Thatcher said the 1,800 Falklanders were “of British tradition and stock.” A task force was sent to reclaim the islands, 8,000 miles away.

The Muslim forces invaded Spain in 711AD and in seven years conquered the Iberian Peninsula.

On 2nd August 1990 Geography helped Saddam Hussein to occupy Kuwait. The distance between the Iraqi southern city of Basra and Kuwait is less than 80 miles.

Geography and great distances did not stop the Crusades which were a series of military campaigns during the time of Medieval England against the Muslims of the Middle East. The first crusade took place in 1096 and the eighth and the last in 1270.

The USA has fought wars in Afghanistan and Iraq and is reluctant to get involved in Syria or in the war against ISIS. But according to Tim’s compelling analysis, US policy in the Middle East is also determined by energy needs. By 2020 USA will be a net exporter of oil. Would this change the nature of the relationship with Saudi Arabia and UAE?

In chapter 5 we find ourselves in the great and fascinating continent of Africa which comprises 56 countries yet it is plunged in tribal and ethnic wars. Egypt has a dispute with Ethiopia over the Nile which is a potential source of future armed conflict. Here the interplay of geography, politics and conflict is glaringly obvious.

In the Chapter about the Middle East, Tim reminds the readers of the artificial borders drawn up by the Sykes-Picot Agreement of May 1916, which was a secret agreement that was concluded by two British and French diplomats, Sir Mark Sykes and Georges Picot. The Sykes-Picot Agreement involved itself with the partition of the Ottoman Empire once World War One had ended. The consequences of which are still reverberating throughout the Middle East. The Islamic State (ISIS/Daesh) in Syria and Iraq is wreaking havoc on Sykes Picot’s demarcation lines.

The book deals with contemporary issues such as ISIS and how it is spreading geographically in Iraq and Syria. Geographical and political borders don’t mean much to ISIS. But I argue here that ISIS succeeds only in places where it has collaborators and collusion by regimes. ISIS can be defeated if met by a disciplined well equipped force such as the Kurds. This fact also explains ISIS’s decision not to get anywhere near the Jordanian borders despite verbal threats. King Abdullah II had made it clear that ISIS will not be tolerated on Jordanian soil.

You cannot disagree with the author when he says:

“In the Middle East power does indeed flow from the barrel of a gun.”

“Prisoner of Geography” is an exceptional work, well researched, argued and documented. The book itself is a treasure of information to satisfy the specialist researcher into contemporary geo-politics and offers a riveting insight to the general reader or student. It traverses the globe from the politics of the natural gas rich of the Arctic Ocean right through the cauldron of the Middle East and South to the rugged terrain of the Falkland Islands. And from the US through Africa to Japan. It is all covered in this magnificent book, which I highly recommend.