With an up-front title “Ne-gro-phi-li-a – From Slave Block to Pedestal – America’s Racial Obsession,” brings to light the French word “negrophilia” meaning, “Love of the negro.” Author Erik Rush’s thoughtful informative book diligently traces 30 years of a country trying to elevate one race above all others, ending in national peril.

212 pages walk readers through how obsession to help slowly transformed into obsession to meet demands for privilege by those not only who are black but even claim to have some such relative anywhere in their background. Whether your views are pro or con, Rush is a well respected author who has done an outstanding job of indexing the solid information presented in his book.

Sylvia Thompson writes of Ne-gro-phi-li-a, “I thought it worth sharing what this term means in the context of what is happening in America.”

She continues, paraphrasing Rush, “‘The condition of negrophilia, spawned from political correctness (PC), is the irrational state of refusing to see evil in some blacks and attributing to all blacks a mythical “holiness.’ Sort of a twisted reasoning that blacks can do no wrong because they have suffered so much. Never mind that other races and groups have suffered as much or more, whites (even the sane ones) have been so indoctrinated with political correctness that they can’t see the idiocy in this thinking. That is deadly.”

Rush, a black man, points out that race is too often used to elevate the unqualified to positions which lower American standards. Sylvia Thompson furthers this point when she refers to former Speaker Of The House, Newt, “Gingrich can’t bring himself to admit that Obama is an evil, disturbed man, because Obama is half-black.”

I’m not sure Erik Rush had Obama in mind when he undertook the huge job of organizing this book material so well. Most political pundits maintain Obama was voted in not because he was half black, or half white- but that war fatigued Americans needed radical change from cowboy Bush. 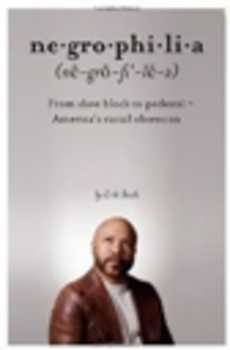 Whether or not Wright’s hatred of a country founded by a race of people other then Jermiah’s own or how soundly he managed to impose his ire on Obama, still has at last three years to be more fully determined.

Dr. Mark Sawyer, Political Science Profession at UCLA states, “Call white people racist and they’ll do anything you want them to.” Mark is also black.

Whether your blood boils with anger or races with joy, “Ne-gro-phi-li-a” is worth every penny- love it or hate it, this is a book you won’t forget.