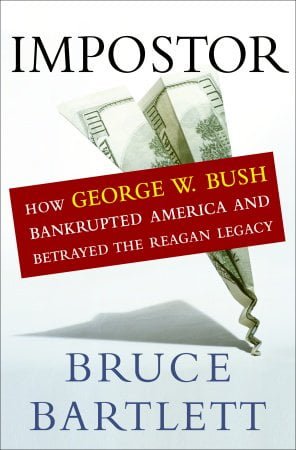 “Bartlett’s attack boils down to one key premise: Bush is a shallow opportunist who has cast aside the principles of the “Reagan Revolution” for short-term political gains that may wind up hurting the American economy as badly as, if not worse than, Nixon’s did.”

“Bartlett, an economist and former Reagan administration official, attacks the Bush administration hard but from the political Right… Bartlett concludes that Bush’s relentless effort to cut taxes will leave an unenviable legacy for a conservative-the need for America’s largest tax increase…. A worthy critique, one that the administration will not be able to dismiss as liberal propaganda.”

Who says words aren’t powerful? On October 17, 2005, after 10 years of dedicated service, Bruce Bartlett was fired from the conservative, Dallas-based National Center for Policy Analysis for writing his forthcoming IMPOSTOR: HOW GEORGE W. BUSH BANKRUPTED AMERICA AND BETRAYED THE REAGAN LEGACY (Doubleday; On-sale: February 21, 2006). Bartlett’s firing caused a flurry of media coverage and Doubleday moved the publication date from April to February.

Bruce Bartlett, a highly respected Republican economist and an alumnus of the Reagan White House and George H.W. Bush Treasury department, started out in 2000 as a supporter of George W. Bush and helped to craft Bush’s early tax cuts. But he was dismayed by the way they were executed. In IMPOSTOR Bartlett attacks the Bush administration’s economic performance root and branch, from the “stovepiping” of its policy process, to the coercive tactics used to ram its policies through congress, to the effects of the policies themselves.

Bartlett, who helped define Reaganomics, shows that Bush is far from being Reagan’s heir and that his policies align him much more closely with Nixon and his failed attempts to woo moderates by enacting liberal programs. Bartlett – a staunch Republican – thinks Bill Clinton’s budget was far better than Bush’s. No matter what you think of Clinton, he cut spending, abolished a federal entitlement program, and created a budget surplus. By contrast, Bush increased spending, created a new entitlement program, and has produced the biggest budget deficit in U.S. history.

Bartlett’s devastating blow-by-blow critique of Bush’s economic performance will be a bible for his critics on the left and right.

Bruce Bartlett is one of the most influential writers in Washington today. Distributed through Creators Syndicate, his weekly column is the most widely read on economics by policymakers at the White House and in Congress.

Bartlett’s weekly column appears regularly in the Washington Times, Investor’s Business Daily, Indianapolis Star, and other newspapers, and on such well-read websites as NationalReview.com, RealClearPolitics.com, and Townhall.com.

Although he is a conservative, many liberals have acknowledged Bartlett’s objectivity. These are a few on-the-record comments they have made about him:

Bartlett’s willingness to criticize his own side when it is wrong led him to be fired by a Dallas-based think tank. David Brooks had this to say about it in his New York Times column (10-23-05): “The economist Bruce Bartlett is a man of immense intellectual integrity. In an era when many commentators write whatever will affirm the prejudices of their own team, Bartlett follows his conscience and has paid a price. He was fired by his conservative think tank for being critical of President Bush.”

Bartlett began his career in 1976 as a staffer to Congressman Ron Paul of Texas. As a staffer to then-Congressman Jack Kemp (later Secretary of HUD and Republican Vice Presidential candidate in 1996), he was a key figure in the origin and development of supply-side economics.

In 1977, Bartlett was responsible for drafting the famous Kemp-Roth tax bill, which formed the basis of Ronald Reagan’s tax program and the 1981 tax cut. He wrote the best-selling book, Reaganomics, named one of the best business books of 1981 by the Wall Street Journal and the Library Journal.

In the early 1980s, Bartlett was Executive Director of the Joint Economic Committee of Congress, the congressional counterpart to the President’s Council of Economic Advisers.

In the mid-1980s, Bartlett was deeply involved in the tax reform debate, having organized the first congressional hearing on the flat tax in 1982. In 1985, a paper he wrote while working for the Heritage Foundation was credited with defeating a version of President Reagan’s proposal in the House of Representatives, because it strayed too far from basic principles. This temporary defeat helped make the Tax Reform Act of 1986 the closest thing ever enacted to a true flat tax.

In 1987, President Reagan’s chief domestic policy adviser, Gary Bauer, invited Bartlett to work on the White House staff in the Office of Policy Development. At the end of the Reagan Administration, Bartlett joined the Treasury Department, where he served as deputy assistant secretary for economic policy until the end of the administration of George H.W. Bush.

Subsequently, Bartlett worked for some of Washington’s most important think tanks, including the Cato Institute and the National Center for Policy Analysis.

Bartlett’s testimony, columns and academic papers throughout the 1990s were instrumental in achieving legislative action on issues such as estate tax repeal, marriage penalty relief, abolition of the Social Security earnings test, and others.