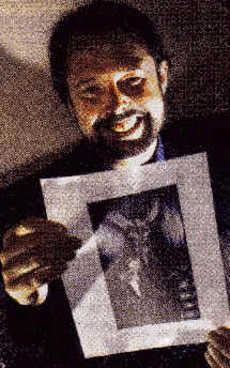 Glenn has been drawing from a very early age, and has begun to suspect it is becoming something of an addiction. Born in Birmingham, he studied Art at Bournville and Sutton Colleges, before going on to Wolverhampton University. … The dream which inspired Skaler hit him in 1994, the year after graduation, and he has worked to realise the inspiration ever since. A passionate interest in early film and the gothic genre has had a huge influence on his illustrations, and ten years of painstaking development has resulted in a very individual style of drawing, somewhere between Beardsley, Rossetti, James Whale and F.W. Murnau, which he describes as Pre Raphaelite Goth.

After asking if a seat was free next to a dark haired girl at Birmingham’s Symphony Hall in September 2002 life changed forever: He and Angela set up together in their own Gothic business in November 2004, were married in July 2005 and have been subsequently been blessed with the arrival of their first child, Charlotte. 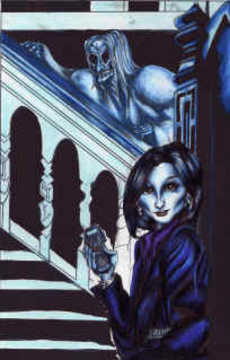