“Keith Winston is tired of fighting. The war between werewolves and wizards rages on in Europe, but he’s come home to Red Rock, Montana in hopes of finding a bit of peace. Instead he finds more strife as he struggles against the pack’s dictates that he resume his place as the alpha’s right hand man.

When he rescues a new wolf on the run, he knows his instant attraction to her could cause trouble. What he doesn’t expect is to find himself embroiled in another battle that goes against all his instincts – and his heart.

Abigail Adler learned about the existence of werewolves only when she became one. With her life threatened by a corrupt alpha, she flees to the only sanctuary she knows: Red Rock. While she’s grateful for the pack’s protection, she chafes under its unbreakable rules of conduct – except when it comes to submitting to the passion Keith stirs in her.

Then her tormentor kidnaps her sister in an attempt to lure her out of hiding. To save her, Abby and Keith must be willing to do the very thing that could get them all killed – break all of the rules.” 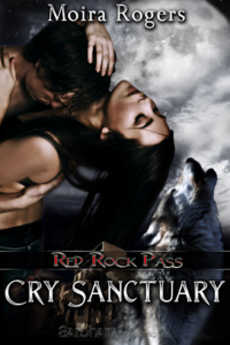 Overall the book was interesting and flowed well. Its new slant on the werewolf lore was enjoyable. Vampires don’t exist, but Wizards do. A part of that magic mixed in with the werewolves, making some of them very strong. It was a neat concept of the hierarchy among the wolves, and the differences between the “alphas” and the “submissives.” I wanted to learn more about it and how they handled changing to their primitive selves.

Unfortunately, the author didn’t explore that aspect. She teases us with the idea of what it would be like for the heroine, Abby, to lose control…but she never does. The reader is teased with what could happen if a submissive male initiated an alpha female…but we never find out. I expected the end to be a battle between the sanctuary and the feuding pack…but it didn’t happen. There were far too many disappointments and not enough resolution.

Since this was an erotic novel, there should have been more than two sex scenes. The scenes flowed nicely though, and there was at least some heat between Abby and Keith. I liked both characters, so I was happy they came together. The added werewolf chemistry had so much promise and should have been explored a bit more. Besides that disappointment, the main distraction I found while reading the sexual scenes was the authors insistence on only using one word for the hero’s…excitement. I ended up looking for the overused word, which distracted me from the scene, making it nearly impossible to get lost in the action. Since there are so many good words to use, there is no reason to use the same one every time.

Another problem was the ending. We were teased with the idea of reading about the characters finally turning into werewolves at the next full moon, since it never happened during the story. It was actually 2/3’s of the way through before a wolf even made an appearance, but the book ended before Abby or Keith changed. Expecting another chapter on that, I could only stare in open-mouthed surprise to discover it had ended. The book was too much of a tease. How can someone write about werewolves but not show a werewolf? The reader doesn’t even know if the villain of the story lived or died. Of course, this is the first of a series, so maybe those questions will be answered in the next books. Overall this story had the potential to be so much more and should have stood alone.