“I reported to Captain Overall who told me I was leading the company across the Chinqualie Canal. He showed me on the map where we were going on a raid for prisoners. My duties were to find a crossing for some 150 men…

When I was given the order to pull out, I started saying my prayers, knowing I’d be exposed as the first to cross into enemy territory and be exposed crossing the canal. I began thinking of my family back home, which is where I wished I was right then.

After the company got on the other side, I took two men with me to scout the road when all hell broke loose. A machine gun opened up at us… The bullets seemed to go all around me. My cartridge belt seemed to sparkle and I felt a tug on my sleeve and pants. Then I dropped to the ground, trying to point where the gun was… I didn’t know I was shot until someone mentioned that I had a hole in my pants.”

In April of 1941, a tall, skinny kid from Harlem named Harold Russell, Jr. decided to join the U.S. Army since so many of his buddies were being drafted. Despite being underage and having a heart condition, he somehow managed to enlist without his parents’ permission, relying on the help of a friend of the family who was on the draft board and willing to sign on behalf of his father.

So, at just 17, Harold was shipped out to Fort Dix in New Jersey where, as he describes it, he “was then separated with all the other blacks and sent to an all black unit.” He was assigned to Company I – 366th Regiment of the 92nd Infantry Division, the same so-called Buffalo soldiers, African-American soldiers whose heroic exploits were recently recounted by Spike Lee in the film Miracle at St. Anna.

Russell, who was a First Sergeant by the time he was honorably discharged in 1945, has belatedly gotten around to writing his memoirs of the Second World War, and this riveting page-turner proves to be well worth the wait. For not only does he recount the blow-by-blow of the bloody engagements in which his company participated during the Italian campaign of 1944, but he also reflects upon the indignities he suffered while serving at a time when the Armed Forces were still segregated, including an interesting encounter the 366th had with the Tuskegee Airmen overseas.

Although he was wounded in a firefight near Naples, Sgt. Russell nonetheless considers himself fortunate, since most of the men in his regiment didn’t return alive. A Purple Heart and Bronze Star recipient, he was lucky enough to reunite with his loved ones, including his beloved wife, Eunice. And their blessed union of 66-years and counting has produced five children, plus numerous grandchildren and great-grandchildren. 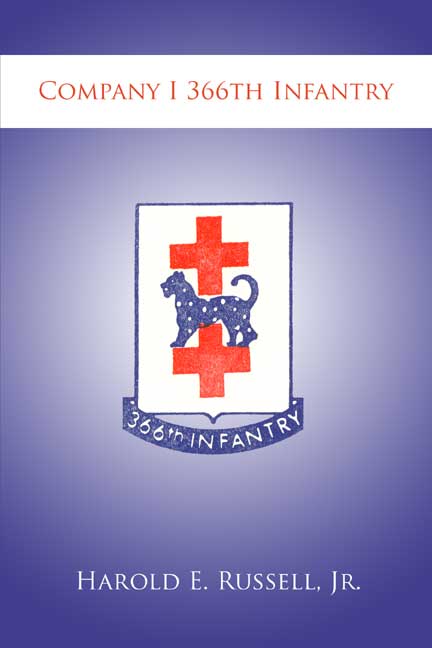 To purchase a signed (or plain) copy of Company I 366th Infantry, visit: