Is the rejection of expertise, particularly advice from experts due to the majority of people having a powerful inferiority complex because they see that they know so little about the world? Or are there other more powerful themes at play?

This book looks at the decline in respect for real knowledge, respect for opinions of those who spend a lifetime studying a subject, and why the trend is so dangerous in a technological age.

A Cornucopia of Knowledge But Few Takers

Today you can study practically anything online and for free, from Harvard’s rightfully famous CS50, the best introduction to computer programming ever created (edX.org), to every K-12 course, and vast libraries of classic books (archive.org) and even scientific papers.

But while more information is available to more people than ever in history, what we see is a race to embrace ignorance. People with no knowledge of mathematics, physics, or medicine think their opinion about the Large Hadron Collider, space travel, or the safety and need for vaccines is every bit as valid as those of people who spent decades studying these complex topics.

The rejection of expertise is, at its core, a rejection of epistemology, the scientific method, and essentially the way to gain real knowledge about something by people who have to look up the word epistemology. What does separate belief based on detailed knowledge from mere opinion?

Kirkus Reviews complains that the author offers no solution to the problem facing society. But Professor (U.S. Naval War College) Nichols isn’t an expert in mass psychology, he is an expert on national security concerns.

As the British would perhaps say of this book, “it’s exactly what it says on the tin.” In other words, criticising it for not solving the problem is not appropriate when the title clearly does not make any such claim.

Nichols’ analysis of a total rejection by voters of the value of advice from real experts is certainly a national security concern, so he does pass his own basic requirement qualifying him to write on the subject. That’s notable because it can’t be said of a lot of authors who, like celebrities, often think that the ability to see a problem is the same as the ability to solve it.

Why is the U.S. a Leader in Falling Behind?

Among the various reasons the author gives for just why the United States is experiencing this willful turn away from science and knowledge are The Internet and its instant access to what may seem like a dozen conflicting but equally expert (appearing) opinions.

This is an excellent analysis. In school, kids are now taught how to look things up on the Internet and are often encouraged to concentrate on this skill as opposed to learning something about the subjects they are supposedly studying.

Unfortunately, educators pay little attention to teaching people how to distinguish between what they find searching Google.com and searching Scholar.google.com. Or that while WebMD is a good source of information, a vitamin ad isn’t, and a really authoritative source is pubmed.gov.

The Book’s Structure – Ease of Reading

In some sections, Nichols does seem to take too long to get to the point. His analysis is usually worth waiting for, but this does make some sections less accessible than others.

(Your reviewer has encountered this willful ignorance many times. For example, as a Google Answers Expert, I attempted to answer someone’s question which was “Why does gravity exist?” I began by saying the question was philosophical or religious, not scientific (it was asked in a science forum.) The questioner was never able to grasp that “Why” in the context was a religious or philosophical question.

Much more dangerously, I was recently shown to a “shelter” during a tornado warning. There were glass windows and a door to the outside in the “shelter.” As an emergency management coordinator, I objected that the hallway was much safer but was ignored. The first example was fun, the second was dangerous ignorance.) 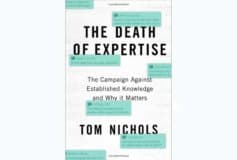 From the tone (occasionally very impassioned) I think the author of the book has experienced similar situations where it quickly becomes clear to an “expert” that someone asking questions is merely looking for an argument, not honestly looking to learn from someone with in-depth knowledge.

In other sections, he argues the rather obvious point that the education system in the U.S. is to blame in part for this willful ignorance. Certainly, there is little in the K-12 school system which matches up with today’s real workplace and life experience, but do kids also grow up resenting the supposed expertise of teachers only to learn later that many of them never even majored in the subject they purport to be qualified as experts to teach?

Although he may be wrong on some of his conclusions, the book is certainly thought-provoking and extraordinarily timely now that we have a U.S. President and EPA head who think global warming is a Chinese hoax and the head of The Department of Energy formerly wanted to eliminate the Department because he thought it regulated oil drilling. (The DoE is actually in charge of the nation’s nuclear arsenal and directs nuclear weapons research.)

All in all, this book is a must-read for those who care about the direction the U.S. is taking, at least until someone comes up with a solution to the growing culture of pride in ignorance.

The author, Thomas M. Nichols, teaches at the Harvard Extension School, The Naval War College, and is a five-time undefeated Jeopardy! champion,