Stewart Lee is a comedian that has never been far from controversy in recent memory. Whether it be being sued for Blasphemy for his role in bringing Jerry Springer: The Opera to the masses (a case thrown out on the grounds, as Lee puts it, “that it isn’t 1508”) or criticised for an out-of-context quote in which he seemingly wishes death on ‘Top Gear’ presenter Richard Hammond, Lee has even caused arguments on occasion about whether or not what he does can actually constitute comedy in any form. But this is because Stewart Lee’s stand-up routines do not always transfer well to paper as much of it is based around form and function rather than the content itself, often making a point about the structure and routines of comedy rather than the subject matter itself. 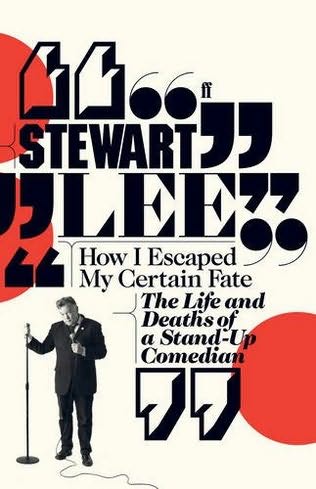 His last three Stand-up shows – Stand-up Comedian, 90’s Comedian and 41st Best Stand-up ever – are documented here in the form of annotated transcripts, punctuated by biographical chapters surrounding the origins of the routines and the events of his life in this period, which coincide with the Jerry Springer: The Opera controversy and also the weird situation Lee found himself in of being both critically acclaimed and a struggling comedian. It makes for a fascinating read and, while the concept of the book may sound difficult, it actually makes perfect sense by the end.

The transcripts take up a large portion of what is a very long book (378 pages) but Lee’s in-depth and strikingly honest footnotes make these extremely readable and undoubtedly the highlight of the whole affair. Infact, this may be the most heavily footnoted book I have ever read – in some cases, the main text disappears for a few pages whilst Lee goes into great detail explaining the origin of a sentence in his routine! These are however, extremely fascinating to read and show to Lee’s detractors the amount of thought that goes into almost every syllable he utters on stage. Lee also makes a point of crediting other comedians who have contributed – either by way of influence or a direct buying of jokes – which is refreshing.

Whilst it will probably not win him any converts from those that don’t find his deliberately repetitive and monotonous brand of comedy funny, it is an honest insight into the alternative comedy scene and the life of a stand-up comedian both in the UK and overseas. With a second series of his critically acclaimed TV show (Stewart Lee’s Comedy Vehicle) commissioned for next year, Lee may be a step closer to the household-name status that the intelligence of his sets deserve. Highly recommended.