AIDS has been known worldwide for decades as a symbol of imminent death. A more serious side of this threat is now coming to our knowledge – one that poses a horrific challenge to the entire humanity.

In her latest book AIDS Orphans Rising (Loving Healing Press, December 2007), Sister Mary Elizabeth Lloyd reveals the number of children left orphans by AIDS to be running not in thousands or hundreds or thousands but in millions all over the world. Known as ‘AIDS orphans’, these children lose both their parents to death by AIDS and their numbers are rising with a shocking rate: every 14 seconds, AIDS leaves at least one child orphan! The threat is global, though the situation is particularly serious in African countries, especially South Africa, Ethiopia, and Zambia. 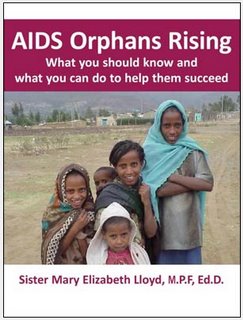 Instead of speaking about AIDS orphans as completely helpless children, Sister Elizabeth prefers to present them as courageous children, who would rather stay together, on their own, than seeking shelter with some distant family or relatives. Calling them ‘helpless’ would be, in Sister Elizabeth’s view, failing to recognize their own efforts to cope with the challenge of survival. Still, these orphan kids are prone to a number of accidents, traumas, and abuse by both natural and human elements, including the possibility of manipulation by terrorists.

Keeping this situation in view, Sister Elizabeth urges on the readers for helping AIDS orphans in the best possible way. She tells about the struggles of these children in their quest for survival. Left on their own, these orphans often resort to begging for getting money to buy themselves food and clothing. Some girls fall into the practice of prostitution to raise money. The emotional trauma of bereavement combined with child labor and abuse is playing havoc on their lives. What we need to do is come forward and salvage the threatened lives of AIDS orphans.

The most effective way for helping AIDS orphans is to boost their resilience – the capacity that allows them to prevent, minimize, or overcome the damaging effects of adversity. Resilience can enable AIDS orphans to grow into happy and productive citizens. Several programs are working toward reinforcing resilience of the child headed households (CHHs) – homes headed by AIDS orphans of the same family.

Sister Elizabeth and her Institute of the Religious Teachers Filippini are part of the humanistic efforts aiming at saving AIDS orphans from the traumatic experiences of poverty and neglect and helping them emerge as healthy members of their societies. As Sister Elizabeth points out in her book, ‘These children need love more than anything else, and governments are not equipped to provide love. Love can come only from those of us who care.’

With a complete list of resources that are working for AIDS orphans and other helpless children, AIDS Orphans Rising opens a window for caring souls to come forward and make a difference in the lives of an endangered generation.