Excerpted from the Preface (page xli)

The average public school curriculum devotes precious little attention to the considerable cultural contributions made by African-Americans. Typically, history books divide U.S. citizens into blacks and whites before focusing only on whites to the exclusion of blacks and other minorities. Now, Tony Rose, Publisher and CEO of Amber Communications, has come up with a novel approach to teaching the history of the U.S. which dispenses with the terms “black race” and “white race” altogether.

This only makes sense, given that the nation has elected as its president, a man of mixed ancestry. As Rose astutely observes in the Foreword to his innovative opus, “There is only one race, the Human race … everything else is culture. As far as ‘white and black people’… there is no such thing.” The author further explains that the notions of different colored “races” was concocted by Europeans to rationalize the enslavement of Africans, the extermination of Indians and the exploitation of Asians. 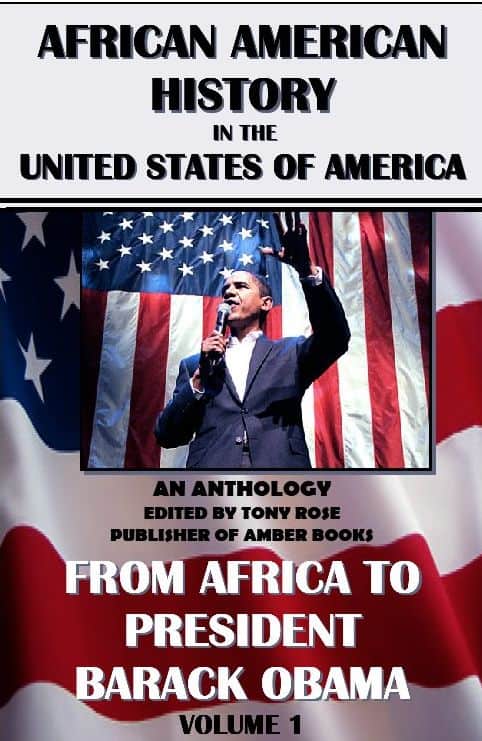 Such designations enabled Europeans to designate Africans as “savage, inferior and sub-human” while simultaneously associating themselves with “superior, civilized and human.” This flies in the face of the fact that Africa had for centuries enjoyed a very advanced civilization well in advance of the arrival of the European. Similarly, the Chinese would never have been subjugated by Europe, had they opted to maximize the militaristic potential of the gunpowder they’d invented. And the Native Americans would undoubtedly be far better off today, had they simply slaughtered instead of welcomed the explorers searching for India who landed in the so-called “New World” instead.

African American History in the United States of America (Volume 1) is a comprehensive anthology edited by Tony Rose featuring priceless contributions by the likes of Lerone Bennett, Jr. Jim Haskins, Brenda Wilkerson, Clinton Cox, Eleanora E. Tate and Otha Richard Sullivan. It even opens with a chapter penned by President Barack Obama, as excerpted from his autobiography “Dreams from My Father.”

This initial installment in the series revolves around ante-bellum America, including such esteemed early pioneers as Crispus Attucks, Harriet Tubman, Benjamin Banneker, Sojourner Truth, Phillis Wheatley and David Walker. Still, most of the figures highlighted here are relatively unknown pre-emancipation role models who excelled in a variety of professions ranging from writing to politics to the military to healthcare to business to the arts to science and technology.

Well-written and informative from beginning to end, African American History in the United States of America is an engaging read which proves to be every bit as entertaining as it is a worthwhile educational tool. Kudos to editor Tony Rose for creating a seminal work which helps the nation take a significant step towards his ultimate hope and dream “that we can all call one another who we truly are – Americans.”

Tony Rose, Publisher and CEO of Amber Communications Group, Inc. has recently compiled, edited and published: “African American History in the United States of America – An Anthology – From Africa to President Barack Obama, Volume One.”