Winter tis the season of over eating, holiday cheer, and colorful fruit that tastes like the inside of flavorless pulpy cacti.

Those bad old days are on the way out. Japanese ingenuity just developed a modern produce harvester. Today its winner is strawberries. It snaps a photo image of the fruit, watches until a berry is 80% ripe then reaches out and cuts it from the vine.

Today it’s strawberries, but this technology is on its way to tomato farms. Other delicious healthy fruit and veggies will follow 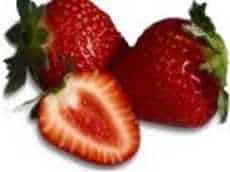 The best news is that it only picks ripe fruit. Being a good farmer requires more than a green thumb, it takes super vision as well.

Currently the Institute of Agricultural Machinery at Japan’s National Agriculture and Food Research Organization partnering with SI Seiko, has developed a robot able to select and harvest strawberries based on their color.

Ripe berries are detected using the robot’s stereoscopic cameras. They measure to analyze level of red appearing in the fruit. When ready for harvest the robot quickly locates it in 3D space and cleanly detaches it.

From observation to collection, the process takes about 9 seconds per berry. It is estimated to be able to reduce harvesting time by 40%.

Prototypes are presently being field tested, marketable versions expected to come next. This artificial agriculturalist bot has been recently recognized at the “4th Annual Robot Award of the Year” in Japan.

The bot is adapt because of its combination of visual acuity and manual dexterity which can be adjusted for other produce. This strawberry harvesting robot can reshape industrial agriculture.

A typical one square kilometer size field requires about 500 hours to harvest time. With the bot’s evaluation speed, the picking bot can dramatically cut this down by little more than half, 300 hours. Better yet, every berry would have a quantifiably similar level of ripeness, harvested with minimum bruising.

Robots can also harvest all day and all night, so fruit reaches us near its optimum freshness.

Plus speed and quality improvement translates to millions of dollars in annual savings for the industry as a whole.

More important robot potential extends far beyond strawberry harvests. Berries are relatively high value fruit. They can be grown in controlled conditions so they become an test case for the robots.

NARO is learning from the strawberry robot about methods of applying technology to grapes, and tomatoes as well as numerous other plants with similar anatomies.

Crop selection based on color could be used on almost all fruits, and many other forms of produce. Stereoscopic vision allows the robot to accurately locate the fruit in 3D space and remove it without damage. This is useful to any agricultural project, a large plus for the entire robotics industry.

Robots have displayed potential in gardening and farms around the globe. MIT has developed prototype bots to monitor, feed, then harvest tomato plants.

Robots have been playing an important part in dairy farming as the bots continue to increase in skills. It frees human beings so they can move up to management roles which robots maintain chores of cheap labor, producing healthier more valuable crops.

Automation of agriculture is proving to be a pivotal development in the early 21st century, akin to the adoption of the combustion engines of early 20th century. Horses were then replaced by tractors, now robots can replace humans in the realm of agricultural labor.

Fear not more U.S. unemployment today. Wonderful as NARO’s sophisticated bot is to behold in action, it is still undergoing test while on its way to market. With enough time though, it will make economic sense to harvest your favorite produce with this new technology.