Just two and half weeks out from a double homicide of a young couple in Springfield Township, Ohio, little news has come out. Lots of rumors and speculation on forums and social media outlets have freely circulated, however. While this gossip is not news per se, one startling development last night is worth reporting. For some unknown reason, the Facebook group Justice For Johnny Clarke and Lisa Straub was yanked off the internet.

Let me backup here and give you a few other nuggets of news reported last Tuesday by WTVG-TV/DT in Ohio. They featured an interview with Lisa Straub’s uncle, Jim Verbosky. Jim believes the couple knew their attackers. If robbery was the primary motive, then it is most puzzling that the attackers left behind many noticeable valuables, such as computers or flat screen TVs.

Specifically, it’s now been suggested that these home invaders were searching frantically for a safe. This is evidenced by the way the house was left, where holes had been punched in the walls and pictures had been pulled down from the walls. The truth is, no such safe was ever in the home of Jeff and Mary Beth Straub, Lisa’s parents.

One might recall that Dick and Perry were looking for a safe at the Clutter home in Holcolm, Kansas, back in 1958. No such safe was there, but the two killed the entire family so that no witnesses would be left behind. Dick and Perry didn’t want to go back to jail, and instead fled for Mexico. This crime comes to mind when thinking of Lisa and Johnny. But how did the killers hear about this safe?

Sources say that Johnny Clarke had been bragging around that Lisa’s parents had a safe. Just to clarify, I don’t know how reliable these sources are, nor do I know who Johnny was boasting to about this safe. Were these friends or just ‘associates’ he was saying this to? And why in the world was he telling this whopper and jeopardizing Lisa’s parents when it was false?

Did Johnny have some hidden grudge against Lisa or her parents? This line of reasoning is only natural when traveling down this road as to why he would make up this story about the safe in Lisa’s house. Come to think of it, that’s quite crazy, since it got him killed and got Lisa killed. Whoever did this, they were playing for keeps, playing hardball, and give off an aura, in the MO left at the crime scene, that they’ve done this sort of thing before.

That is, this was professional criminals who did this. Johnny was talking loosely to the wrong people. He had to have known who he was dealing with, so the implications are indeed scary, to me. Why would he do this? Sure, idle speculation, but one postulate leads to another, and there you have it, your hunched up in a dark corner, sweating bullets, fearing the ring of a telephone, and nowhere to go – you re-check your front door bolt locks for fear of an intruder. 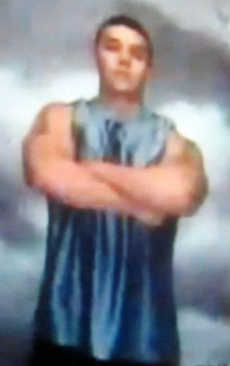 It was most odd last night in the way that the Facebook page Justice for Johnny Clarke and Lisa Straub was quite suddenly pulled. I had been able to at least get a few kernels of corn on the case. Not much, mind you. The atmosphere on the page was tense, to say the least. I suspect this is why ‘the arbiters that be’ at Facebook decided to yank it. Some kind of ethical infraction. Moreover, I suspect this infraction had to do with the way the moderator was attempting to put our mystery girl on the spot, with pointed questions about her behavior on the night of the murders.

By now, everyone seems to know who this mystery girl is, even yours truly. I won’t mention her name, but I will try to reconstruct the questions posed to her by this moderator, that comes off sounding like a tough homicide detective putting a suspect under the hotlamp. Let me just say, the censorship by Facebook will not keep the cat in the box. Perhaps investigators identified violations in the protocol of inquiry, I don’t know? Paraphrases of questions I remember:

1.Was Johnny going to call her back?

2. Since she is pregnant, will she take a polygraph test later on?

3. Was her boyfriend going to go over to Lisa’s house that night also?

4. Did she see cupboards opened and the house ransacked that night? (I would ask her whether she went into the house and whether she saw the bodies before the father discovered them?)

5. Did she go with John P. Clarke over to the house?

Perhaps a reason for the pulling of the page will surface in the media today? I’m just reporting the reality that JFJCALS has disappeared from the face of the earth. What are the improprieties? Interfering with an investigation? Is Facebook a court of law also now?

And on another note, why is the FBI now involved in the case? That lets me know this is bigger than was originally suspected? A post on a forum identified this factor of FBI involvement as a sign that it was a professional job. This rings true for me as well.