Tucked away in the northern province of Guanacaste in Costa Rica, is the revolutionary new concept in retirement communities, the Sun Ranch.

Before we get in to what makes Sun Ranch unique, let us discuss a little about out of country retirement in general.

There are many determining factors and considerations when retirement age sneaks up on us. Some include climate, of which most tend to lean in the direction of the tropics in this regard. Or scenery, whereas there are some that like the mountains and jungle and others that prefer the beach. Furthermore, the most popular is the economics of it all. Does it make financial sense?

Judging from the titles of much media on the subject, money appears to be highest on the consideration list: Affordable Retirement. Retire Cheap in Costa Rica, Top10 Cheapest Retirement Locations. 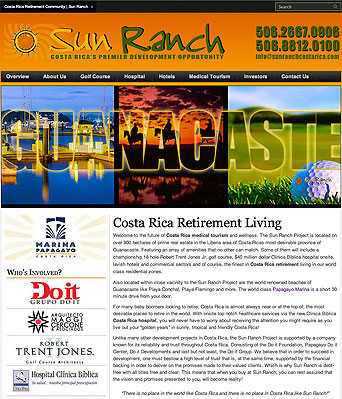 Once determining the most affordable retirement locale, it is time to consider the remaining including healthcare, standard of living, political stability, climate and the overall “comfort” of the country itself.

The benefits to retirement in Costa Rica are numerous.

Costa Rica has lured American and European retirees with its beauty, affordability, and stability in its government. Furthermore, Costa Rica is a tax haven for retirees where American citizens do not have to pay income taxes on social security received from the U.S. government.

Investing in Costa Rica is in many instances, easier than it is back home. Foreign investors have equal rights as the Costa Ricans.

Sun Ranch is a retirement community in the Guanacaste region that is unlike any other in Central America. Offering onsite medical care via the Clinica Biblica, a private non-profit Costa Rica hospital with a proposed value of $40 million, a Robert Trent Jones Jr. professional golf course, assisted living and a vast array of other amenities including close proximity to Costa Rica’s finest active marina, the Papagayo Marina.

In relation to the rest of the world’s medical tourism destinations, Costa Rica is the new kid on the block. Only now, over the past 5 years, has Costa Rica really come in to its own in this highly competitive market. As quickly as the country entered the market, it has equally made advancements in technology and quality of care to keep on par with countries like India and Thailand.

In 2009, Clinica Biblica in San Jose, Costa Rica, was ranked #5 in Latin America for private hospitals by America Economica. In 2010, a plethora of new contenders entered the mix however Clinica Biblica held its stake and secured the #6 spot.

World-wide developers are beginning to wake up and take notice of the increase in demand for medical facilities on-site. To date, no other project in Central America has stepped up like the Sun Ranch.

The Sun Ranch project is supported by the team responsible for bringing us Nautica, a beachfront resort development in Playa Brasilito, Catalina Cove and the Do It Foundation.

The Do It Foundation brought the Free Wheelchair Mission to Costa RIca in 2004 and have since donated over 8500 wheelchairs to less fortunate Costa Ricans. This Costa Rica charity is world recognized for their contributions in philanthropy throughout the poverish country. John Scheman, founder of the Do It Foundation, believes that giving back is not only a philanthropic gesture but a necessary one if we are to make the world a better place for our children and set examples for generations to come.

At Sun Ranch, the celebration of life and family will be abundant where families and retirees can relax, enjoy the many amenities at their fingertips and feel the comfort of knowing that all your medical and health needs are at arm’s length away!