One out of 5 will celebrate the season with a new cellphone. Some enjoy the new toy in days to come, some not so much.

The difference will be in the deal which cell phone companies today impose on us in the name of “contract.”

You can be over $783 ahead when all is said and done if you count to ten on the way in.

Shop around again before making that final decision. It pays, trust me. I’ve had a mobile phone since their 42 pound power pack had to be installed in the trunk of the car. In those bad old days the term was “car phone.”

There was also little competition until now where a world of choices lay before us.

Instead of falling in love with your phone, consider how much you’ll love your service provider because that’s where your ultimate dependency will occur.

Consumer Report claims Costo is the real deal but I’ve purchased two phones there. I found out that it was not entirely true. I do not have any experience with Verizon’s Motorola Droid X which they carry today but both phones offered at Costco were models were about one year old. To Verizon’s credit, as a service provider the big V is a far better choice then AT&T or T Mobile.

Both of the latter do everything they can to stick it to the customer dollar-wise while Verizon does make an effort to alter contracts to meet changing needs.

Watch that usage. Nothing costs more then what cellphone companies term “average.” Don’t become 1 of 5 customers who will be surprised that they get higher expected bills whatever cell phone service you choose.

It isn’t necessary to be a daily time-tracker. Just make note of your new billing cycle. {I’ve been using this Gift Box image however it did originate on Google, if that matters?} 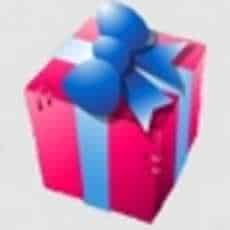 If you can’t count on yourself, Pageonce.com sells apps to keep your chatty good times fund you can afford.

Pay an extra $31 for expensive minutes when you probably need more time in months to come. Let them post-rate a $10 or $20 upgrade back to the beginning of your current billing cycle. You save money and don’t risk that 75 cents a minute charge from recurring.

When shopping for phones or services, ask for any discount if possible. Check to see if you or your relative works for one of the companies where discounts are granted. Check your union, credit card companies or Google each carrier’s name asking for discounts they offer.

You can probably cut costs by 1/5th or 20% although some deals do not include Apple or iPhone plans.

Often as I refer to Walmart as the “Ugly W” store since it seems to get no respect from many, they do deserve serious consideration if you have a relative employed there.

Walmart used to carry older models, but now they have up to date fancy phones. The variety is almost unlimited. Even better they’re becoming Top Dog in the “If you need it” department.

A 2009 survey resonants reported that more then 1/3rd of all phone owners, only one-half or less number of minutes they pay for.

Part of that is true because of the large number of nights and weekend minutes cell phone providers throw in. Today, smart is the new “rich” so why not use up the freebies and pocket that prime-time cash.

Keep billable minutes to a minimum and enjoy our cell talks on the company dime.

Consumer Reports found that 16% of their readers have contracts. They want to switch carriers but fear being hit with high exit fees. T Mobile is the worst company I’ve had experience with. Their service was terrible. They have rude customer service response and dropped calls is a daily event.

I ordered a new Blackberry. They delivered an empty box. It took three months to get the phone yet they charged me $20 extra per month for having the Blackberry they didn’t send.

Today they still have a termination bill levied against my credit that I plan to pay when they can snowboard thru hell.

The company I went to nearly three years back has proved to be no problem what so ever.

Most of us today love the new Smart Phones. My son wants one because it’s half as the cost as they were last year.

Consider if you get yourself locked into the mandatory two year contract they come with. You are paying for the phone. The basic service, $670 Internet on top of that, plus a hefty Federal tax along with numerous other taxes tacked on.

Anytime you can use multiple phones. A shared plan is the way to go. As a family you can actually save a couple thousand dollars at least over the next couple years.

To save when shopping, it pays to go where the most choices are. I recommend at least looking over the huge variety of choices and prices at hand on Amazon.

While there, you can even get a Free Christmas MP3 download each day of Manehimn Steam Roller.