It has been three weeks since a three-judge panel published a decision in Young v. Hawaii which held that the right to openly carry a firearm (Open Carry) is not limited to the confines of one’s home. That decision was published at 10:00 AM on July 24, 2018.

That decision became binding on every Federal judge in this circuit the moment it was published.

Perhaps one day the Young v. Hawaii decision will be vacated and overruled by an eleven-judge en banc panel of the 9th circuit court of appeals but until that day comes, the decision remains the law of this circuit and remains binding on every Federal judge in this circuit.

Nota bene: Yes I know that if someone obtains a permanent injunction from a district court and the State of California does not appeal then that probably moots my California Open Carry appeal, Charles Nichols v. Edmund G. Brown Jr., et al. So what? It isn’t as if there is some huge check with my name on it awarding me attorney fees and costs waiting for me at the end of the line should I win my appeal. I am not an attorney, I cannot collect attorney fees. And my costs, to which I could only recover a fraction, while personally significant are trivial in comparison to the benefit or restoring Open Carry to California today and not some day. If the state does not appeal a loss from the district court, that loss is just as valid and binding on the State of California as would my winning my appeal. And if the state does appeal, the injunction would still be valid pending the appeal. Win or lose, I will have the satisfaction that I am the first, and only, person to challenge California’s Open Carry bans and the first person to file an Open Carry challenge in the 9th circuit (Mr. Young filed his lawsuit after mine and Mr. Young did not care whether his license was for concealed or Open Carry).

It takes just one competent attorney with just one natural born plaintiff to file a motion for a Temporary Restraining Order (TRO) against California Attorney General Becerra restraining him from enforcing California’s Open Carry bans (California Penal Code sections 25850, 26350, and 26400).

Likewise, for those of you who would like a license to openly carry a handgun but are prohibited from doing so because you don’t reside in a California county with a population of fewer than 200,000 people then your attorney can file a motion for a TRO against the residency prohibitions found in California Penal Code sections 26150 and 26155. I would recommend filing a TRO against the ancillary requirements that one have “good cause,” “good moral character,” etc.

Even the President of the United States, Donald Trump, had a TRO issued against him.

I am not a fan of licensing but the easiest and simplest TRO and preliminary injunction involving licensing would be in a case from a plaintiff who already has a license to openly carry a handgun in his county of residence but is prohibited by state law from openly carrying his license outside of the county in which he resides.

The second easiest and simplest would be a case filed by anyone who has a license to carry a concealed handgun in the state of California issued pursuant to the two statutes I cited above. However, such a person risks incurring the wrath of his county sheriff or police chief who might arbitrarily decide to revoke the license.

This would be a great opportunity for those police chiefs and county sheriffs who say they oppose California’s Open Carry bans to show where they truly stand. With the NRA and its official state organization the CRPA which oppose Open Carry or with the Second Amendment to which Open Carry has always been the right guaranteed by the Constitution.

There is a window which might be closing. Nobody has tried to close that window as of yet but any active non-recused judge of the 9th circuit court of appeals can make what is known as a sua sponte (on his own) call for a vote on whether or not to rehear the case en banc (before an eleven judge panel).

If a majority of judges (currently 12) vote to take the case en banc then the Young v. Hawaii decision will be vacated and it will be the subsequent en banc decision which will be binding in this circuit.

However, en banc votes don’t happen overnight. First the court must give Mr. Young the opportunity to file a response and then there are various rounds of internal court procedures. It took three months and twenty-three days (113 days) from the time the sua sponte call was made by a judge in the vacated three-judge panel decision in Peruta v. San Diego, and that sua sponte call did not come until after there had been various motions to intervene and petitions for an en banc rehearing.

All in all, it took one year, one month and thirteen days (406 days in all) from the day the Peruta v. San Diego three-judge panel decision was published to the day the decision was vacated because the appeal was to be reheard en banc.

In any event, you won’t see any of the so-called gun-rights lawyers fighting for Open Carry because they, and the organizations which hire them, such as the NRA, CRPA, SAF, CalGuns.nuts, et., oppose Open Carry. How do we know that? They said so in their Federal court filings and/or in their oral argument before Federal judges.

Finally, it should come as no surprise to anyone to one day discover that these groups and their lawyers were digging through the law books searching for a way to reverse the Young v. Hawaii decision instead of taking advantage of the gift it is.

If you decide to seek a TRO and preliminary/permanent injunction against California or Hawaii’s or any other state or local Open Carry ban then send me an email at the following address. Feel free to attach a pdf of your electronic filing and please include the case name, number, the district it was filed in and a PACER link to the docket in the text section of your message. Note that my spam filters are set to high and if you are a lawyer then send it from your company email. There are many domains which have a high percentage of spammers. I’ve blacklisted most of them and so if you email me from one of those domains then I will never see your email, my mail server automatically purges it. The same is true of emails which use profanity or have anything other than a pdf attached to the email. PDF Attachments are scanned. 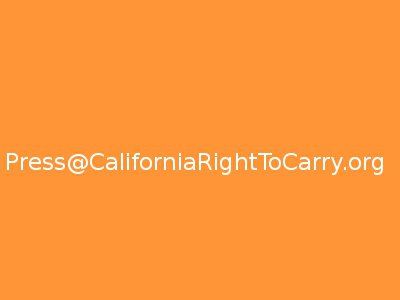