On Monday three Britons (believed to be of Pakistan origin) were found guilty of plotting to blow up airliners heading for North America. These suicide missions, if successful, would have resulted in the death of many thousands.

Four other men were found not guilty of any involvement in the plot and a jury was unable to reach a verdict on a further suspect.

The three that were found guilty: Abdulla Ahmed Ali, Assad Sarwar and Tanvir Hussain, recorded martyrdom videos, but claimed the “plot” was just a stunt. According to reports, they had intended to set off a small device at Heathrow’s Terminal 3, to cause chaos and to promote a documentary video criticizing British and U.S. foreign policy.

Were these men really planning to blow up as many as 18 aircraft over the Atlantic, or were they set-up by the alleged ringleader (Abdulla Ahmed Ali) into believing this was a harmless stunt to raise awareness on British and U.S. foreign policy? 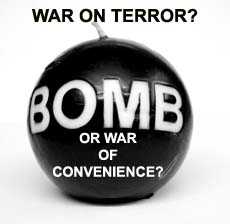 The police and MI5 had carried out more than a year of surveillance work before the gang was rounded up, and it took a further three years, and two trials, to obtain a conviction. The investigation and trials are estimated to have cost a total of Pounds 100 million.

Bearing in mind that a large percentage of “potential terrorists” arrested in Britain are usually set free (only three were convicted out of eight in this plot), some of the evidence seemed almost too good to be true, especially when we remember the inaccuracy of the reported movements of the London bombers some years ago. It was very much like the case of the terrorist’s passport found intact amongst the devastation of the WTC attack (which survived the plane impact into the tower and the resulting fires).

The jurors involved in these trials had great difficulty in finding the defendants guilty of any connection to a transatlantic bombing plot, despite the evidence presented.

Could it be just a coincidence that this conviction arrived at a time when the government desperately needs support for continuing the war in Afghanistan (and sending even more troops there)? Was it also a coincidence that the WTC attack 8 years ago just happened to provide public support for the invasion of Afghanistan? And let’s not forget those messages from Osama bin Laden, who almost certainly died some time ago, which have a habit of arriving at the most opportune moments.

If we are to believe that British people of Pakistani descent are a potential danger to Britain (as some have suggested), why is the government choosing to spend millions of pounds on watching a handful of them (there are nearly one million in the UK), instead of blocking their entry into the country? Perhaps that money could be better spent on checking to see whether British immigrants are loyal to this country or not. If not, they should be encouraged to live in a country where they feel more “politically” comfortable.

The current political parties have been criticising the BNP for their views on immigration, yet their approach (in many ways) would dramatically reduce (if not eliminate) the so called dangers we are constantly told exist from terrorists.

The UK government has spent years bending over backwards to help the growing number of immigrants and ethnic minorities, often forgetting the needs of the indigenous population, and Britain now has many citizens with religion and roots to countries that they (and the US) have attacked and killed. The question we need to ask is whether our immigrants are loyal to Britain first, or to their country of origin (or religion)?

A similar situation exists in the US, where many politicians in the current administration have dual nationality (Israeli and US passports). Where do their loyalties lie when it comes to Israel?

Surely it makes more sense to apply certain conditions to obtaining citizenship? The first should be to respect and follow the laws and culture of that land (not to expect the country to make exceptions). If they are unable to accept these conditions (for whatever reason), they should not be granted the same privileges that others have. This rule applies in many other countries, why not in the UK?

Of course, the “War on Terror” may, as many believe, have a more commercial purpose. The former leader of Iraq (Saddam Hussein) only became a “terrorist” when he took control of his country’s oil. Were Britain or the US really that concerned about all the people he was killing before that happened?

Afghanistan is just part of the oil jigsaw puzzle, which will also include Iran and Pakistan later. Finding “Bad Guys” in these countries make it so much easier to propose military action, forcing a regime change or occupying the land for self control.

Things are never quite what they seem, but if you look at all the countries that have oil (or the countries that can carry pipelines for it), you will discover the sinister hand of big business and dishonest politicians (Libya is the latest example). There is nothing (and I do mean nothing) that some people will not do to get hold of it.