The recent proposal by the coalition government in Britain to force people on benefits to undertake manual labour, if they have been unemployed for a certain period of time, could see a return to a life that existed a century ago.

In the early part of the twentieth century it was not uncommon for the richer members of society to employ servants, who would work incredibly long hours for peanuts. But these were considered the lucky ones, as the rest had more uncertain fates.

Whilst everyone knows that some benefit claimants do not want to work (even if a job is available), it is very wrong to assume that all those claiming unemployed benefit are lazy, good for nothing scroungers. 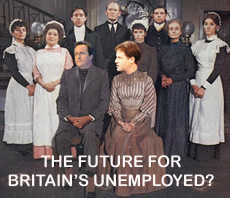 Has the government forgotten how many people are unemployed at the moment (a figure expected to rise dramatically over the next 4-5 years) and who is responsible for this situation (the banks).

Is it really fair to force those who have lost their jobs, because of this artificially created financial crisis, to sweep the streets, pick up litter or dig gardens? It wouldn’t surprise me if some of them are asked to clean the toilets in some bank later, to make sure that they “know their place.”

Surely, it is bad enough losing your job without being humiliated as well.

And to make matters worse, the task of finding this menial work for the unemployed will be given to a private company, who will no doubt be paid vast sums of money for this invaluable service.

What the government could do is create “real” jobs with the money they are spending, by making use of all the empty offices and shops that have appeared since the crisis began. These could be used to develop a new service that either helps the community, or provides an income for the local Council. There must be more than enough people unemployed who have the necessary skills to run a business and would prefer this option to the one proposed.

Unfortunately, despite David Cameron’s attempts to appear as “one of the lads,” by rolling up his sleeves, taking off his tie or having a pint in some pub, he knows as much about the “working class” as Prince Charles does about making a chip butty!

We are told that if the unemployed refuse to do the manual work requested of them, they will lose their normal benefit for 3 months. But if that happens, the government will have to provide some other form of payment to assist them, what’s the point? And if they refuse to give any at all, the person will be forced to beg or steal to survive. What a great idea!

It is quite possible that many will turn to crime, knowing that if they are caught and sent to prison, they will at least have a roof over their heads, receive regular meals and get many other benefits that were taken from them on the outside. This will result in the need for additional funding for all the new prisons that will be required to cope with the demand.

The government realise of course that all the pressure they are putting on the public (not just the unemployed) could cause a civil riot and the authorities have been receiving training for such an event. Some believe that this outcome is being invited, so that Martial Law can be introduced, along with many other new rules and regulations.

For those who still have a job, try not to judge those who are unemployed too harshly, you could be joining them soon! And if you think trying to survive on benefits is the life any sane person would choose, there are at least two million who would gladly swap places with someone who has a job.