The number of British holidaymakers staying at home for their vacations has increased substantially over the last year, but it is unclear if there is any one particular reason for this change.

Flight disruptions caused by the volcanic eruptions in Iceland almost certainly have played a part, with thousands of travellers being stranded all over the world because of an ash cloud.

Cancelled flights due to industrial action by British Airways staff would not have helped, and of course the ongoing “terrorist” threat involving planes, although this has affected Britain less than other countries. 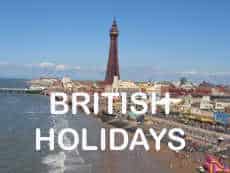 The collapse of two tour companies recently would have added extra concern to those travelling any distance, as such events reduce the confidence holidaymakers have with other companies. Perhaps another factor would be the instability seen in other countries, with riots being reported in the news.

Traditionally, holidays abroad are quite often cheaper than staying at home, yet despite this fact, some are almost embarrassed to admit that they have chosen a less “exotic” destination for their vacation.

With the economic climate looking as if it will continue to be difficult over the next few years, maybe the number of people looking for a holiday nearer to home will increase?

Whilst it is always nice to visit different countries, Britain still has a lot to offer. Hoseasons, one of the leading self-catering specialists, have over 12,000 places to stay in coastal and countryside settings throughout Britain, Ireland and Europe, from secluded lodges to family holiday parks (with plenty to do), and from thatched cottages to boating holidays – even luxury villas.

And if you are looking to stay at home this year, why not try something different? Have you ever thought of going on a Champagne Balloon Flight, tried Wakeboarding, a Steam Train journey, indoor skydiving, a ride in a Ferrari, Flight Simulator, Flying lesson, Ghost Hunting, or something equally unusual?