When a person like Bernard Madoff can cheat his friends, family and business associates out of around $60 billion, and then suddenly plead guilty to all the charges “without any deal,” you just know something is not quite right.

Since being arrested in December, Madoff had been allowed to remain in his $7 million penthouse, even though this would obviously provide easier opportunities for Madoff to complete some last minute transactions. Why was he allowed this privilege?

Just over 3 months later U.S. District Judge Denny Chin was less generous, sending him to jail while awaiting sentencing on June 16, saying “In light of Mr. Madoff’s age, he has an incentive to flee, he has the means to flee, and thus, he presents a risk of flight,” 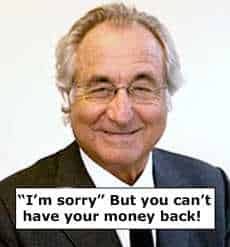 Clearly, Bernard Madoff did not pull off this scam alone, yet in his latest court appearance he showed his willingness to take all the blame. This is not some courageous act, nor is he really “Sorry and Ashamed,” some kind of deal has been struck.

The fact that he has not revealed the others involved, or told us where the money is, gives us a good idea of how powerful the “others” are and a clue to the leniency either he or his family will receive later.

To believe that Madoff will face a sentence of up to 150 years in June is about as likely as most of the investors getting their money back, although it wouldn’t surprise me if some haven’t achieved this in the last couple of months. The most likely scenario is that Madoff will be released from jail early (due to “health problems”), at a time when public feelings are less hostile and perhaps when some other event creates a suitable distraction.

People like Madoff will always exist while certain members of the public have this foolish notion that money grows on trees, there really is a pot of gold at the end of a rainbow, and money can be obtained without any effort.

Another Ponzi scheme hit the headlines in Russia in 1994, taking an estimated $1.5 billion of investor’s money. The company was called “MMM” after the founders: Sergei Mavrodi, his brother Vyacheslav Mavrodi, and Vyacheslav’s future wife Marina Muraveva (the first letters of their surnames).

Unfortunately, such scams have a devastating effect on the more legal schemes available (yes, they do exist!), preventing some from obtaining a real chance of making money. To avoid disappointment or financial loss, select a scheme that requires no “membership fee” or “compulsory investment,” and offers a product or service that has real benefit. If it costs nothing, you have nothing to lose!