News that Muammar Gaddafi has been killed will no doubt raise a few cheers around the world, but is his death a cause for celebration or concern?

To answer that question we need to ask why the rebellion began in Libya in the first place. The ‘official’ explanation is that the people of Libya suddenly decided that it was time for a change of leadership, even though Gaddafi had been in power for 42 years. But what or who encouraged the people to fight back at this particular moment in time? 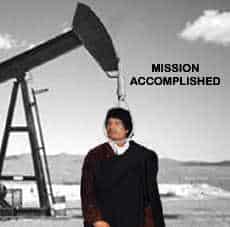 There can be no doubt that the west played a key role in the demise of Gaddafi and supplied Libyan rebels with weapons, military experts and finance. We also saw how active NATO was in this battle, who were initially given permission to enforce a ‘no fly zone’ to ‘protect’ the civilian population. However, more recent airstrikes clearly showed that their involvement went much further than that and the ‘victory’ would not have been achieved without this help.

In a previous article (Libya – Here we go again!) I wrote “Why has it taken so long for countries like the United States, Britain and France to become angry enough to do something about it?” And of course the answer was “Oil.” For a number of years Gaddafi had an agreement with the west to supply oil and although he demanded an increased percentage many years ago, the profit margins were still acceptable to western companies.

These terms were clearly being negotiated quite recently, hence the many visits to Libya by leading politicians (including Tony Blair), in an attempt to ‘sweeten’ the former leader into agreeing to favourable terms. The release of the “Lockerbie Bomber” was just part of the deal, which caused an uproar in the US and Britain.

Obviously, something about the new terms was unacceptable to the oil companies (or maybe Gaddafi simply said no) and this prompted a new course of action. Exactly the same thing happened in Iraq and the result was the same.

You can be fairly sure a new leader has already been selected for Libya, a person that will have the blessing of the west, but more importantly has agreed to an oil deal that is more profitable to the west (at least 49% of the profits).

Had Gaddafi been taken alive, he would almost certainly have been tried for some crime and sentenced to death (just like Saddam Hussein). But what of the man himself? It seems he started out with fairly reasonable ideals (so did Hitler), but as often happens, wealth and power made him become more extreme.

Gaddafi was a dictator and by all accounts bordering on insanity, but was he really so different to some of the people who hold the power (and wealth) in the west? Some western leaders may appear ‘normal’ on the outside, unlike Gaddafi, but they are just as willing to kill to get what they want and have done so many times.

As I mentioned in my previous article, the west were fully aware of what was going on in Libya, but chose not to take action because this would endanger the deal they had with Gaddafi for the oil. In fact, the CIA used to help Gaddafi in supplying information about his people, which often led to their execution. Terrorist suspects were also taken to Libya for interrogation, to avoid the human rights laws in their own countries (US mainly).

Did Gaddafi deserve to die, perhaps, but before you reach for the champagne we should try to understand who the good and the bad guys are. Both Gaddafi and the west have a considerable amount of blood on their hands and at the end of the day the only real difference between them is the image they portray to the public.

The other problem with accepting these ‘forced’ revolutions is where does it end? Should the western “Elite” be allowed to invade countries that have something they want, just like a school bully? Will this ‘force’ be used on its own people if they step out of line?

You may not feel too sorry about the departure of Gaddafi, but it is worth giving some thought to the reasons and people behind it, and wonder whether our own leaders are any better.