Facebook joins forces with Skype, adding the latter’s video chat feature to the former’s pages. Facebook users now have the chance to talk to their network of friends one-on-one through video calls. This new feature of Facebook is powered by Skype’s video service which reinforces Facebook’s effort to be the premiere communications hub on the Internet. The one-on-one video call also serves as a response to Hangouts, an app recently launched by its rival Google that offers similar features and lets Google+ users chat with up to 10 people simultaneously.

The agreement was announced last Wednesday at Facebook’s headquarters in Palo Alto, California. The move is seen as a deepening of the relationship between Facebook and Microsoft which is in the process of buying Skype.

The new feature gets directly embedded into Facebook’s messaging platform. It doesn’t require Facebook users to sign up for Skype but instead can use it separately. Technology experts see an overlap in the features offered by both Facebook and Google+. However, most see Facebook’s design is much better for one-on-one chatting while Google+ is much better for group chats.

The partnership between Facebook and Skype comes at a time when competition in the Internet market becomes stringent by the day. Google, like Facebook, needs to contend with similar fast-growing companies such as Groupon and Twitter competing for online advertising revenue. 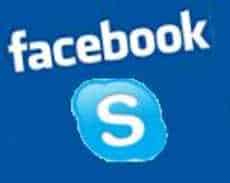 Facebook’s new Skype video is also expected to benefit Microsoft, which owns 1.6 percent of Facebook. Microsoft announced it is buying Skype for $8.5 billion in May. Microsoft is taking Google in its own game with it Bing search engine. It is hoping that Skype will help increase its presence in the Internet.

Skype was founded in 2003 and allows its users people to make Internet phone calls and video calls at no charge. It has also developed premium services.