Very fortunate fans of comedy will get to enjoy over 75 celebrity impressions as comic legend Jim Meskimen takes them on a a journey around the world in a retro-70’s style vibe that pays homage to Rich Little and other great impressionists of the past, and breaks new ground in a totally original way. Fans for his final show for year 2012 will get to see him perform his hit “Shakespeare in Celebrity Voices,” LIVE with audience

CREDITS OF THE PERFORMER

As a professional actor for nearly thirty years Jim Meskimen has appeared in the films Apollo 13, The Grinch, Frost/Nixon, The Punisher, Not Forgotten, There Will Be Blood and many others. Some of Jim’s TV credits include Friends, Whose Line is it, Anyway?, Fresh Prince of Bel Air, Castle, Lie to Me and Rules of Engagement, among over two hundred more notable works in film, T.V., and even video game. 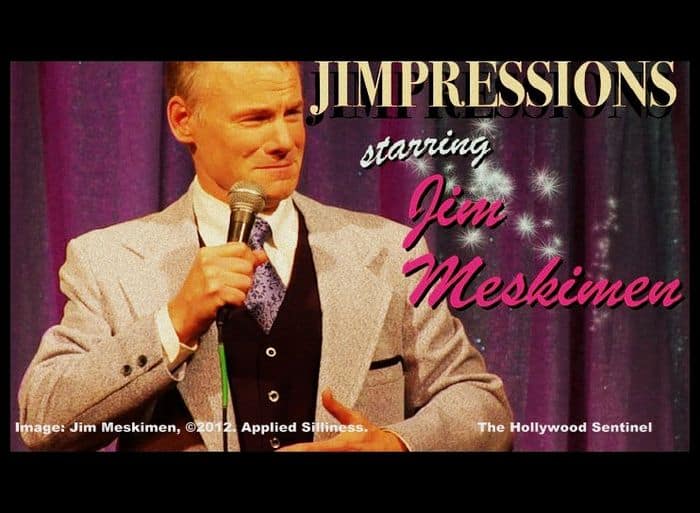 As an impressionist, Jim Meskimen’s impressions of political figures in the 2004 election were showcased in animated cartoons by Jibjab that were among the most popular items on the Internet. His viral video, Shakespeare in Celebrity Voices topped three-quarters of a million views in 2011 and his subsequent impressions videos have cemented him as a major YouTube talent.

THE NAME OF THE GAME

Jim Meskimen now takes his prodigious improv and mimicry to a new level at The Acting Center Theater in Hollywood in his one-man show, JIMPRESSIONS. Consisting of two full acts of comedy, impressions, songs and stories from his career thus far, JIMPRESSIONS is packed full of celebrity voices, presented in a tongue-in-cheek retro 70’s vibe, complete with white shoes and bell bottom suit pants, as he pays homage to mimics Rich Little, Frank Gorshin and other greats.

JIMPRESSIONS, a two-act homage to the art of vocal mimicry, is his ninety minute, two-act tour de force in which he relates his observations of and experiences with over 65 different celebrities, from George Clooney, to Kevin Spacey, from William Shatner to Morgan Freeman, and even Flipper. He has performed the show in Hollywood, Tampa Bay, Toronto, Vancouver, Baltimore, London, Chicago and Sydney, Australia, where audiences embraced the JIMPRESSIONS show and demonstrated a strong appetite for a new, fresh look at the art of celebrity mimicry.

WHAT PEOPLE HAVE SAID ABOUT JIM MESKIMEN

The Australian Today Show dubbed him, “The World’s Greatest Impressionist.” The response to JIMPRESSIONS has been remarkable.

The Firesign Theatre’s Phil Proctor calls Meskimen “A vocal magician who pulls characters out of his head – and even more amazing, Jim shows us how he does it.”

Impressionist for the Craig Ferguson and Howard Stern shows, Josh Robert Thompson describes JIMPRESSIONS as, “Staggering genius. That’s all there is to it.”

The New York Times said, “Meskimen is a very talented impressionist, but what’s most impressive here is that he not only imitates obligatory celebrities like Arnold Schwarzenegger, George W. Bush, Jack Nicholson and Jimmy Stewart, but also people like George Clooney, Paul Giamatti and Ricky Gervais, celebrities you wouldn’t think were ripe for impressions until you hear his takes on them.”

Jim Meskimen says about his show, “It’s designed to do three things, demonstrate my infinity of voices, inspire people to create and enjoy life, and to be 90 minutes of face-hurt-from-laughing hilarity. So far, that’s exactly what people are telling me they come away with.” The “face-hurt” goes away the next day. The rest of the show will stay with you.

WHERE YOU CAN SEE IT

The last Hollywood show of Jim Meskimen for 2012, will be held one night only.

(Southwest corner at Western Ave, free parking next to CVS).