NewsBlaze News
Home Business Latest Business A Conversation with Shmulik Fishman – How the World of Work is...

We recently had the opportunity to chat with Shmulik Fishman, the founder and Chief Executive Officer of Argyle – an infrastructure-as-a-service company that makes workforce data (everything from UBER to Fiverr) accessible through a single API. Argyle is used by Insurance providers, credit card issuers, and applicant tracking systems to unlock the power of workforce data.

Before Argyle, Shmulik Fishman was the Chief Operating Officer of STRATIM, a company he co-founded in 2014, building software that automated the operations of large-scale vehicle fleets across the United States and Canada for clients such as General Motors, Enterprise Rental Car, and Zipcar.

Fishman shared some of this thoughts and observations about the changing nature of work in the new gig economy and its impact for businesses large and small.

“Work is becoming very transactional. Instead of 9 to 5, we now have 45-minute jobs, 20-minute jobs, 5-minute jobs. Think of an Uber. Think of a Postmate courier. These are jobs that happen in very small increments of time. 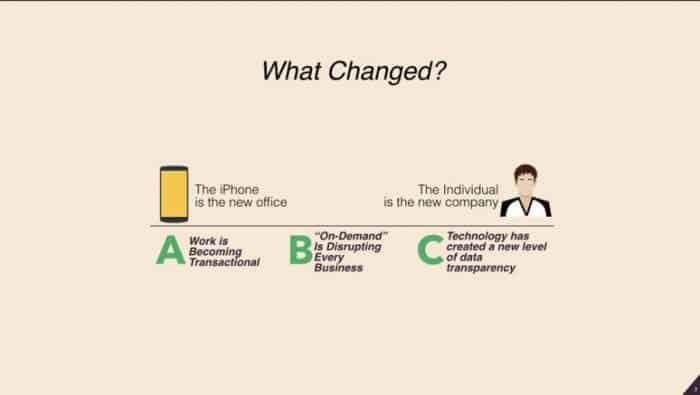 Another key trend that’s happening is that technology is disrupting everything. Because we have all this data coming from phones, we have fundamentally shifted how we can think about work. We’re going to talk about it a little bit today.

Sidetrack for a second, just to prove this point even further. There’s a really interesting ad campaign going on with McDonald’s. In fact, last year, they spent more money on this ad than Uber spent on ads for recruiting drivers. 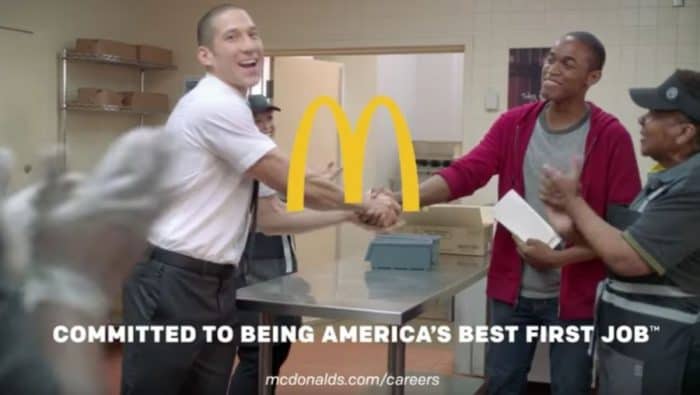 McDonald’s is scared of this trend, too. This is not that something that’s happening in Silicon Valley. Some tech nerds are thinking about it. There’s a trend that affecting very large established businesses.

We can talk about this problem at length, I do it professionally, but the real trick is figuring out how to solve it. What is the solution to it? Where can we skate towards? How can we actually embrace these changes? I’m going to tell you a little bit about what companies are doing to respond to these trends.

This is actually what is happening for a huge cohort of workers today. They get up in the morning. They open their phone and they say, “Hey, what jobs are there?” There’s a job at 10:00 AM to walk dogs. It’s a company called Rover. If you have a dog, you should check out this platform. You click a button and somebody comes and gets your dog and walks it and returns it for you. Crazy, right?

But there’s a bunch of people that log on in the morning, they click this button, they go get some dogs, they walk them. Then at 12:00, they say, “Hey, I’m going to deliver some packages for Best Buy.” They do that for a couple of hours. After that, they drive some cars. After that, they unbox things for Wonolo, which does a lot of work for Macy’s. 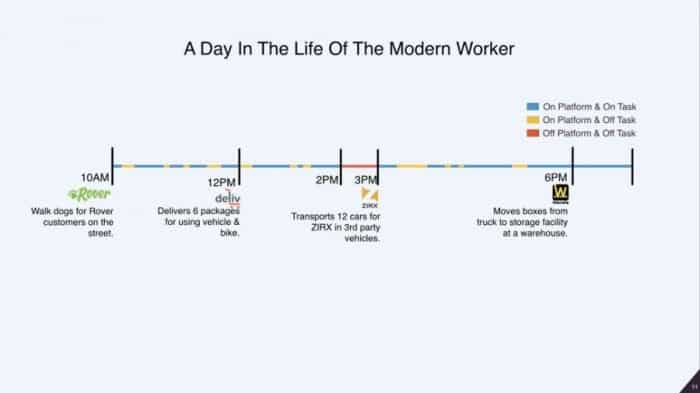 What you’re noticing is that we’re mapping together somebody’s day, but this day is not one job. It’s 20 jobs. It’s not for one company, it’s for many companies. Because we have all this data, and technology is disrupting everything, we’re able to see when they’re working, when they’re waiting for the next job, when they’re off. We can very precisely splice this data.

This is a huge opportunity, by the way, for the world of insurance. It means that you know exactly where the risk is and what type of risks there is. We can get it down to the millisecond now.

In my line of work, I classify these gig workers in three ways. There is one type of a cohort of people that also have a standard 9 to 5 W2 job, and they’re also providing work to the gig economy. That’s Section A. The vast majority of these workers are providing 30 to 60 hours from multiple platforms, five or six platforms. 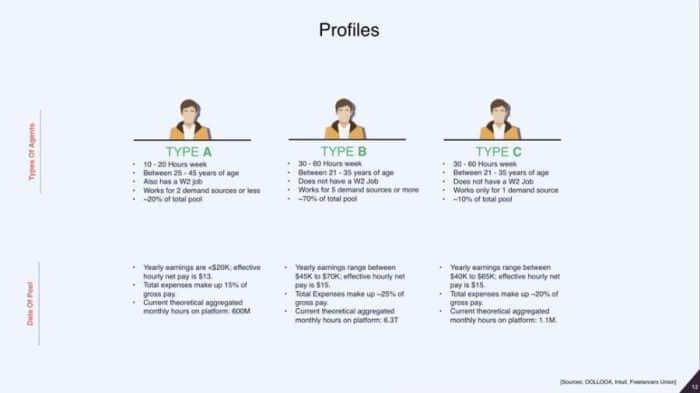 Another interesting thing that I’ve started to realize is that for all these jobs, 80% of it is the exact same thing. The skills that we’re looking for to walk a dog, to deliver a package, to be an Uber driver, 80% of these skills are actually incredibly similar.

There are some things that are different. Obviously, if you’re walking a dog, you need to have some skills around being courteous around the street, to have communication skills. That might be different than if you’re boxing or unboxing things at Macy’s.

Thank you to Shmulik Fishman for his time and insights.