At the end of last year, the World Health Organization announced that cannabidiol (CBD) will no longer be considered a scheduled drug. During its five-day November meeting, CBD was one of the 16 substances that were reevaluated in terms of accepted international regulations – and most industry analysts have suggested that the potential market upside could be significant for the world’s medical marijuana producers.

Over the last decade, there has been growing interest from various nations regarding the broadly accepted potential for the medical uses of cannabidiol. As a response to this growing interest, the WHO has conducted experiments and gathered scientific evidence that will more accurately articulate the benefits and risks that associated with marijuana and its components.

The Result of WHO’s Reevaluation

It is important to note that there is already a significant amount of supportive research for these trends. Current studies show that, unlike the chemical tetrahydrocannabinol (THC), some of the components of marijuana (specifically cannabidiol) are not likely to create dependence or be abused. In May 2018, the WHO plans to conduct a comprehensive review of different preparations for cannabidiol, as well as to conduct more intensive reviews of other marijuana components.

What Does This Mean for Medical Marijuana?

With this latest announcement from the WHO, CBD is no longer considered a controlled substance. International policies regarding CBD could now be influenced by the recommendation, in a process that allows people wider access to non-psychoactive cannabinoid drugs.

As such, this announcement is also likely to create bullish financial opportunities for businesses and investors with exposure to the medical marijuana industry. One of the companies most likely to be affected is Medical Marijuana Inc. (OTCMKTS:MJNA), as the stock is now trading well-below its 52-week highs. In terms of legacy in the medical marijuana industry, the company has an established reputation as a leader and innovator in the emerging market.

Overall, the stock market is not showing many opportunities for growth investors as the S&P 500 is currently posting annual gains of nearly 20%. The reverse has been the case for many of the big medical marijuana companies, and MJNA is now trading nearly 50% lower than the highs posted at the end of last year. 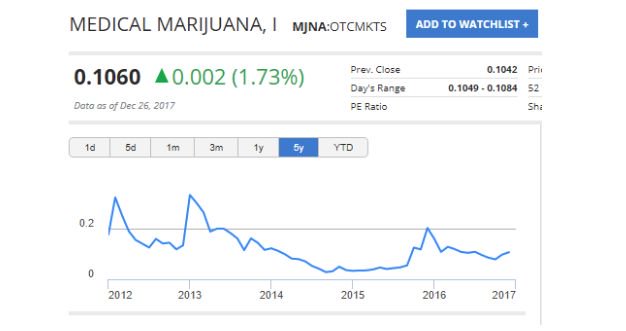 These lower stock prices in MJNA are coming as the company announces its historic registration of CBD products in Paraguay following legalization in the country. This creates a scenario where Medical Marijuana Inc. has established throughout the region as an emerging markets earnings generator that should see substantial financial results over the next several quarters.

In April 2014, the Brazilian government approved the importation of a drug produced by MJNA (Real Scientific Hemp Oil), which is a CBD Hemp Oil. HempMeds Brazil has received approval for its first three indications (Parkinson’s disease, chronic pain and epilepsy), and so this is not the first time Medical Marijuana Inc. has established itself as a leader in these regional markets.

All of this points to a strong potential for bullish upside, given the discount that is currently seen in the price of MJNA. As the industry is allowed to expand through legislative and political advancements (like those seen recently at the WHO), further declines look unlikely as macro factors support the outlook for earnings within the sector.