Finishing out the month of September, a notoriously slow time of the year for Costa Rica, the Costa Rica retirement sector received a boost of confidence from none other than the charismatic, President Laura Chinchilla while visiting the Big Apple.

President Chinchilla, one of the world’s few female leaders, was in New York City this week to attend the Millennium Development Goals Summit at the U.N. headquarters. While there, the president went on a mission of “selling Costa Rica” to the American public. 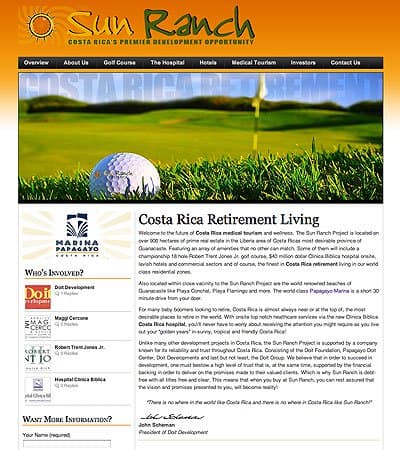 President Chinchilla talked with Rick Sanchez of CNN about issues pertaining to how Costa Rica leads by example when it comes to Latin American countries with special emphasis on human development and education.

Costa Rica has become a poster child for stable democracy in the area and in 1987, then President Oscar Arias (predecessor to Chinchilla) was granted the Nobel Peace Prize for his efforts in quelling the civil wars of Central America that were so common at that time.

Furthermore President Chinchilla bolstered the idea of foreign investors coming to Costa Rica and investing in sustainable, stable and high yield markets that Costa Rica has quickly become famous for.

One of these markets is the Costa Rica retirement market. Over the years we’ve seen a dramatic shift in how this market has developed. These days more and more retirement communities are offering a plethora of amenities including professional golf courses and most importantly, onsite medical facilities.

The medical tourism sector of Costa Rica is a thriving industry with over 22,000 American citizens having visited Costa Rica in 2008 for medical procedures. These numbers rise annually and are estimated to be around 50,000 by 2011.

In a report from McKinsey & Company, it was highlighted that medical tourists from the United States and Canada prefer Latin American countries like Costa Rica due to the shorter travel time, affordable costs, and an opportunity for a memorable vacation in a tropical tourist destination.

Sun Ranch is located a short distance from the Liberia International Airport which was recently granted some $35 million to extend the processing capacity to 1500 simultaneously by adding a new terminal. Liberia International is being called the “business hub” for the Pacific Coast of Costa Rica, bringing business and tourism traffic alike to the province of Guanacaste in record numbers.

Backed by one of Costa Rica’s most credible developers, the Doit Group, Sun Ranch is destined to become a standard in the Costa Rica retirement sector and possibly all of Central America.

For more information on this incredible opportunity to own premium Costa Rica real estate in the country’s most affluent retirement community, please contact Jerad Portner today @ 506.2667.0906

Ahead of Mexico’s 2021 Election, A Spotlight of Alleged Corruption is Cast Upon David Monreal

US ‘Alarmed’ Over Yellow Fever Outbreak in Brazil