Secretary Kerry Defends Himself Against Critics

Amid the controversy that made headlines after US Secretary of State John Kerry made derogatory remarks against Israel, the US diplomat today defended himself against his critics by saying that he never stated, publicly or privately, that Israel is an apartheid state or that it intends to become one.

In a press statement in Washington DC, Secretary Kerry expressed his commitment and support for Israel.

The US diplomat said that for more than thirty years in the United States Senate, he has spoken in support of Israel.

He pointed out that as a US diplomat, he has spent countless hours working with Prime Minister Netanyahu and Justice Minister Livni.

“I believe in the kind of future that Israel not only wants, but Israel deserves.” – Secretary Kerry

Secretary Kerry made it clear that he will not allow his commitment to Israel to be questioned by anyone, particularly for partisan, political purposes.

“I want to be crystal clear about what I believe and what I don’t believe.” – Secretary Kerry

Secretary Kerry explained that Israel is a vibrant democracy and he never ever stated, publicly or privately, that Israel is an apartheid state or that it intends to become one.

“Anyone who knows anything about me knows that without a shred of doubt.” – Secretary Kerry

Secretary Kerry also pointed out that words have the power to create a misimpression, even when unintentional.

Secretary Kerry said he believes that the only way in the long term to have a Jewish state and two nations and two peoples living side by side in peace and security is through a two state solution.

He reiterated that in the long term, a unitary, binational state cannot be the democratic Jewish state that Israel deserves or the prosperous state with full rights that the Palestinian people deserve.

“That’s what I said, and it’s also what Prime Minister Netanyahu has said.” – Secretary Kerry 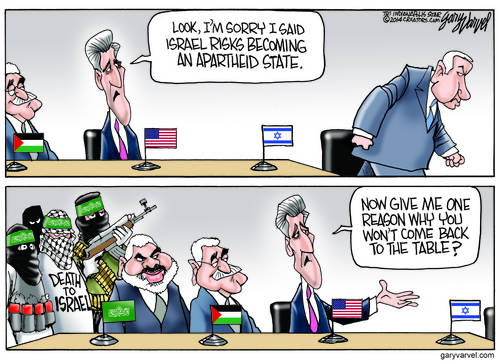 Secretary Kerry also slammed Justice Minister Livni, former Prime Ministers Barak and Ohlmert who have all invoked the specter of apartheid to underscore the dangers of a unitary state for the future.

“It is a word best left out of the debate here at home.” – Secretary Kerry

Ironclad US Commitment To Israel

In his meeting with Prime Minister Netanyahu in Jerusalem earlier this year, US Secretary Kerry affirmed the US’ strong commitment to the security of Israel.

Secretary Kerry said Israel has to be strong to make peace and that peace will make Israel stronger not just with its near neighbors, but throughout the world.

That is why Secretary Kerry highlighted that the United States has remained in close contact with both sides to attain lasting peace once and for all.

The US is committed to working with both parties to reach a permanent status agreement that will end conflict and all claims.

Secretary Kerry said he plans to work with both sides more intensely in these next days to narrow the differences on a framework that will provide the agreed guidelines for permanent status negotiations.

He added that an agreed framework would be a significant breakthrough which would address all of the core issues and would create the fixed, defined parameters by which the parties would then know where they are going and what the end result can be.