Big E reborn the strangest version of Elvis yet

Some days it seems like just everybody wants to be Elvis. In addition to Elvis clothing, Elvis eateries, Elvis hotels there are radio stations named after Elvis Presley.

Either way, Elvis is back! Returned in a form that cannot escape notice, this time Presley revisits life in the form of young, very young Elvis.

Abigail Rose Murphy-Elvis is a modern kid… Who won’t wear suede in the middle of summer. Our gal, like E P, skips leather in lieu of sandals when temps make always hot Elvis sweat in that well known Elvis jumpsuit. She doesn’t forget to sport his trademark cape though.

Yes, she’s just a kid but why not a talented kid with a career in entertainment. Stay-at-home Mom passed along the genes, she majored in Drama. Dad was once in a band. 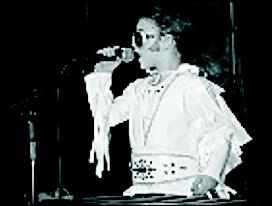 Can it be a surprise that daughter begged her parents to let her entertain at the Iron Horse Pub in Wichita Falls, Kansas one recent Thursday night?

Rosey, or Miss Murphy-Presley as she will soon be known to the masses does a mean hip-giggle that would make the original Elvis envious.

Ordinarily a 6 year old with a curled up lip isn’t a pretty sight. Rosey the entertainer is into authenticity, not girly girl stuff. She softens it by tossing her fans the familiar Elvis scarf when winding down hip gyrations.

How can a kid do the hip-trick so well one must wonder. Well, she’s been working at it a while, one year, a long time in the life of a six year old.

Seems this venture began when mom Darcy and dad Kevin took not-yet midget Elvis, who incidently was born in Memphis, so familiar with Presley music, to an Italian eatery where the future Murphy-Preseley got her first view of a pretend Elvis.

It’s been said Rosey then exclaimed, “I could do that job. I want you to book me!” (Now there’s a kid who knows show biz, even speaks the language – “book me.” )

Once having observed what fun it is to play Elvis, Miss Murphy kept reminding her folks she was intent on being a Presley.

Darcy finally agreed to a talent contest held at Brazoria County Fair. In spite of many dance and sing competitors Rosey won hands down.

Mom thought that was the end of squirt-size Elvis. To her amazement, Miss six-years-old announced that, being Elvis is her future. No questions there, just confidence. Hip-to-lip, the kid’s got “It.”

Now satisfied with her Elvis costumes the midget performs alongside her Italian restaurant mentor, tall Elvis.

High energy, she leaps onto a stage – eyes shielded behind large dark eyeshades with rhinestones glistening under the lights.

One restaurant isn’t the latest Elvis’ only gig by any means. She does other fairs, retirement homes, private parties, meetings, and some shows now produce financial reward thank-you-very-much.

The future is bound to hold midget Elvis impersonators. The name alone brings fame and fortune. I have unabashedly decided to name my own next son Elvis Elvis.