We won’t know who we are if we destroy who we’ve been. In essence, people need their history; we need that “link” to the past in order to understand our ancestors – how they lived, what they discovered, and how our lives have been transformed and shaped by their miraculous beginnings. Our “old” world is falling into disrepair while technology takes over the globe. But education, knowledge, and beauty live in the past and, thankfully, people are starting to realize that it must be restored and preserved.

Built in 1919, “The Ellen Theatre” sat in Bozeman, Montana like a slightly dingy leftover crown. Over the years, The Ellen Theatre fell into disrepair, a victim of the ever-changing landscape. When “The Ellen Theatre” was brand, spanking new – variety shows, silent movie premieres, school plays, weddings, symphony concerts…and even an opera featuring a live elephant, took place inside that historic landmark. In fact, The Ellen was THE place to be each and every weekend! 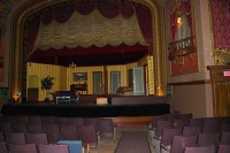 The Ellen Theatre’s history is truly amazing; the stage once hosted people who would become stars and legends that America still has the ultimate pride in calling their own. The Ellen was a favored stop on the vaudeville circuit, and because of the restoration project, programs were discovered showing that

The Ellen featured true stars on their stage such as, Vivian Vance (Lucy’s best friend), famous fan dancer Sally Rand, and the legendary ventriloquist Edgar Bergen, along with his wise-cracking wooden sidekick Charlie McCarthy. This stage – this building – saw entertainment history at its finest…but that spotlight dimmed and went out when television, movies, and things like ‘YouTube’ arrived on the scene. Technology took over America and, over time, monuments to the Golden Age of entertainment all but disappeared.

However, “The Ellen” struck gold. The “Montana TheatreWorks” needed a permanent home since its beginning in 2008, and set its sites on “The Ellen Theatre.” Owned by the Russell family since the 1930s, “The Ellen” (along with the “Rialto” right across Main Street) had most recently been used to show movies by “Carmike Cinema.” But when the possibility came up that “Carmike” might not renew their lease, the fate of both theatres was dismal. The owners were interested in selling and Mike McKenna, working on behalf of Montana TheatreWorks, contacted them. A deal was struck and The Ellen received a new outlook on life. 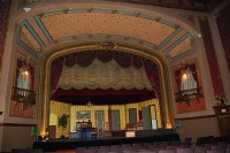 The grandiose plans of the Montana TheatreWorks *included returning “The Ellen” to a glorious, live stage venue, serving as a home for MTW productions, as well as a performing arts center for various community and professional groups. And MTW was true to its word! After endless construction crews, volunteer hours, elbow grease, polish, and paint, The Ellen once again came alive as MTW put on its very first show, Charles Dickens’ “A Christmas Carol.” Over 6,000 people attended fourteen performances, and “The Ellen Theatre” took her first step to becoming the glorious venue she’d once been.

Montana TheatreWorks, along with a great many people who truly wanted and needed our history to remain, got together and made “The Ellen SHINE. And today, “The Ellen” is once again a remarkable showcase for magical musical theatre, plays, community events, local performers, and world-renowned talent. Audiences are battling for seats at sold-out shows where they’ve been able to enjoy everything from cowboy legends “Riders In The Sky,” to former NBC anchorman Tom Brokaw who discussed, “To Kill A Mockingbird.”

Each MTW production has true community spirit surrounding each and every event. By allowing community members to take part in the process of replicating professional theatre, cast members work with highly-skilled musical directors, vocal coaches, choreographers, musicians, and stage directors to hone their amazing performance skills. This type of camaraderie and education allows these magical actors and singers to shine like professional jewels in “The Ellen Theatre’s crown. In addition, the hard workers behind each and every performance – the backstage crew members – work with a professional stage manager in a team effort that results in a truly magical production. The theatre is a family, and “The Ellen” brings that family together.

And…playing RIGHT NOW is one of the funniest productions to ever be performed on the stage. For those of you who don’t know, Lend Me a Tenor is Ken Ludwig’s comedy about opera singer, Tito Merelli, and his impending performance of Verdi’s “Otello” at a gala fundraiser for the Cleveland Opera Company. This is one of those plays that will have you laughing so hard you will be rolling in the aisles!

The character of Merelli is known to his fans as “Il Stupendo,” and the audience laughs out loud as they watch Merelli fall victim to a series of misunderstandings and plot twists that prevent him from taking the stage. But, with the theatre comes the mentality that no matter what…the show must go on. So the company’s general manager convinces his assistant to impersonate the opera star as “Otello.” Everything is fine until the real Tito wakes from an accidental overdose of tranquilizers and both men are headed for the stage at the same time! From that moment, a chain-reaction begins of mistaken identity and innuendos that remind the audience of the classic, unforgettable comedy routines of the Marx Brothers.

The Ellen Theatre *and its rebirth is a very personal story for this writer. I grew up in a very small town in the east which had a small playhouse that’d been around for a good, long time. As I grew up, I watched this amazing building – which had hosted the ‘best of the best’ New York actors and actresses – fall into such a state of disrepair that the yellow tape went up and the doors of the theatre were closed for the rest of time.

A group by the name of TriArts saw the beauty and history locked inside that falling-down barn and used their money, hard work, dedication, and pride to restore the *Playhouse* into something truly magnificent. I worked there one summer and it was, literally, the best job I’ve ever had. From the smell of the makeup to the camaraderie and spirit of the “team” working together to create an unforgettable production – everything about that summer will remain in my mind until the day I die. Even the costumes were fantastic; some looked as if they were brand new and on the backs of the Shakespearean actors who once graced the stage of “The Globe Theatre” in the early 1600’s.

There is a true magic that appears on stage that can never be replicated by television or movies where someone yells out, “Cut!” and the director gives you another chance. The actors and actresses of the stage are true royalty, who know exactly what needs to be done and can give that amazing performance every single night…and twice on Sundays.

Fantastic performances are all that is offered at The Ellen Theatre, and audiences get to sit in their seats surrounded by pure and utter history as they enjoy the production. There is no experience in life more magical than watching the curtain rise, hearing the music begin, and entering into another world based on charm, grace, and class.

Bozeman, Montana is already the envy of a great many people. Not only do they have the beauty of nature surrounding them, they have the beauty of the stage! As Oscar Wilde once said, *I regard the theatre as the greatest of all art forms, the most immediate way in which a human being can share with another the sense of what it is to be a human being.

Come be a part of that amazing art form and celebrate the history, the present, and the outstanding future of the majestic, Ellen Theatre!

*Please send all mail to: *