The battalion chief for the Clark County Fire Department, Erik Poleski, said 24 people were taken to Las Vegas area hospitals after a panicked crowd stormed out the doors of the MGM’s Grand Garden arena.

This was just after the WBC/WBA welterweight (147 pounds) unification title fight between Floyd Mayweather Jr. and Marcos Maidana had just finished at the venue. It was reported that over 60 people were injured after a rush to leave the arena. Some exits were found to be closed and leaving spectators were funneled to certain directions of egress. 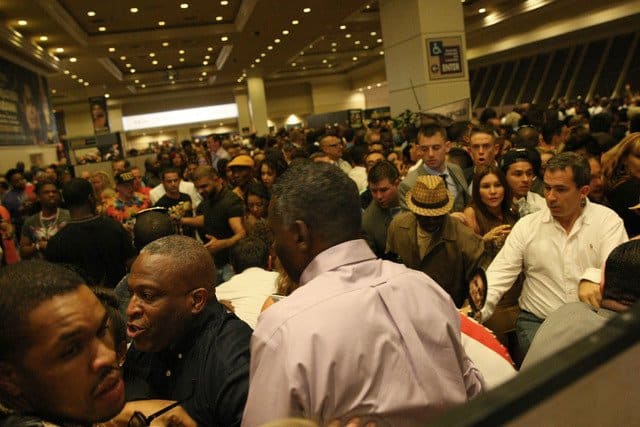 The Las Vegas police confirmed reports of a loud bang in the area that probably led to spectators stampeding out. The bang was caused by a temporary wall that fell down near the adjacent food court, Poleski added. The bulk of the medical transports were for minor injuries like cuts, and sprains, as well as leg and back injuries. “Most of the injured seemed to be from traumas associated with being stepped on,” said Clark County spokesman Erik Pappa.

Mayweather, 46-0, said post-fight, “This was a tough, competitive fight, a fight the fans wanted to see. I wanted to give the fans excitement. A true champion can adjust to anything.” Maidana, dropped to 35-4, and was upset by the decision. “I trained hard, and he never hurt me with a punch,” said Maidana. “I feel I was robbed,” Maidana added through a translator. “I feel I won.”

Throughout the fight, Maidana tried to crowd Mayweather and the Argentinean threw every conceivable punch. Many didn’t score though. Mayweather suffered a cut over his right eye in the fourth round from an accidental head butt.

Punching stats by Compubox showed Mayweather landing 230 of 426 punches to 221 of 858 for Maidana. Mayweather was a heavy favorite before the match and was said to have made $32 million for the fight.

After the fight, while celebrating inside the ring, Mayweather posed for selfies with pop-singer Justin Bieber. The champ wore a hat with a new logo- TBE, which stood for, The Best Ever.

“This won’t be my last fight. Tonight I put on a show. If he wants it, and the fans want it, let’s do it again, Mayweather added.”

The other main fights on the card had British fighter, Amir Khan, taking a unanimous 12-round decision over Luis Collazo. Former Kronk boxer J’Leon Love survived a fifth-round knockdown to score a 10-round unanimous decision over Marco Antonio Periban. Love went to 18-0.

In other boxing news, Oscar De La Hoya met with selected media before the welterweight unification title bout between Mayweather Jr. and Maidana. This was the first time he has formally addressed such a group since finishing a three-month rehabilitation stint in December for his latest battle against substance abuse. De La Hoya spoke about his awkwardness’ with CEO Richard Schaefer and future plans for Golden Boy Promotions.

Radio talk-host, Ron Cameron, announced that he is hooking up with Mohamed Hamood of Clark Street Gym in Detroit to showcase an event June 21, at Joe Louis Arena. Lane Staal is scheduled to headline.