The first time that Doug DeWitt was offered a movie role was 1987. Mickey Rourke asked him if he’d appear in “Homeboy,” a sleeper of a boxing film that was written and produced by Rourke, who also had the starring role as cowboy/boxer Johnny Walker.

DeWitt declined the role because he was in the midst of his sterling boxing career, which saw him square off against such championship caliber opponents as Thomas Hearns, Nigel Benn, James Toney, Matthew Hilton, Sumbu Kalambay and Milton McCrory.

“At the time I had a one track mind, and it was strictly boxing,” said DeWitt. “I loved boxing so much, and I was so passionate about it. The part I turned down wound up going to Iran Barkley.”

After retiring from boxing with a 33-8-5 (19 KOS) record in December 1992, Dewitt set his sights on an acting career. He reached out to Rourke, who set him up with an acting teacher and also gave him a small role in the 1996 film “Bullet,” which Rourke also wrote and starred in. The role enabled DeWitt to get a coveted Screen Actors Guild (SAG) card. 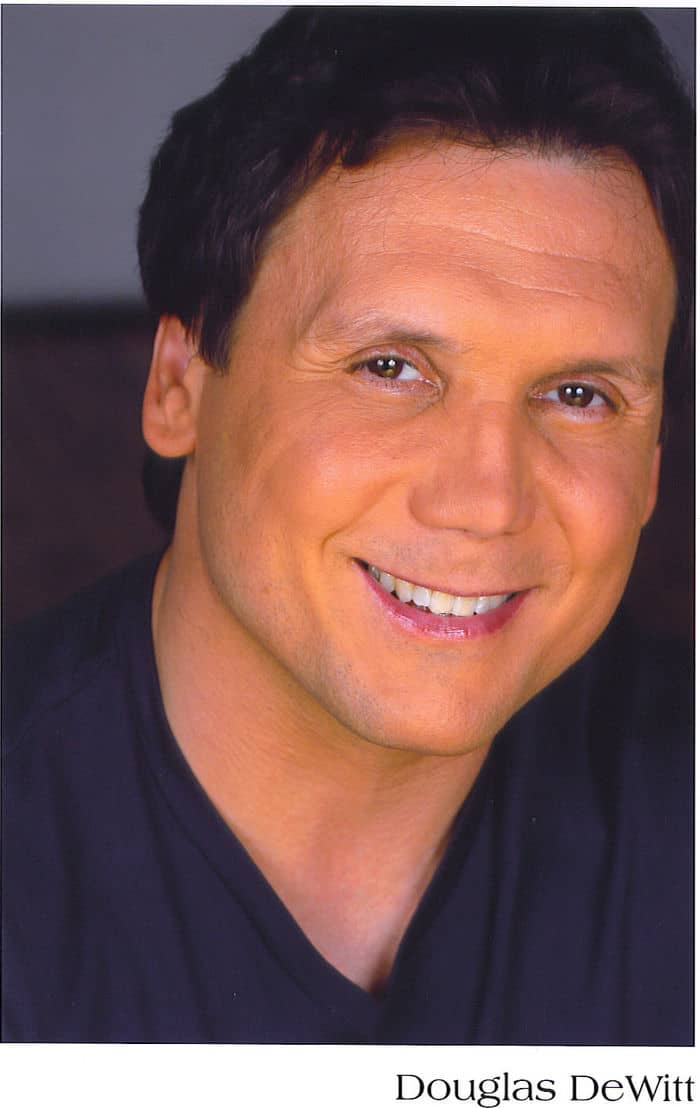 DeWitt has put the same dedication and commitment into acting that he did to boxing. Over the years he has appeared in small roles on the stage, television and in a few films, often playing a gangster or a cop.

Beginning on Thursday, February 4, his skills will be showcased on the stage in “The Cutting Den,” the fifth play to be written and produced by former New York State Athletic Commission Chairman Ron Scott Stevens. It is directed by Richard Caliban, and will run from February 4-21 at the Soho Playhouse in downtown Manhattan.

The play is set in a Brooklyn barber shop/bookie parlor during the first week of the Major League baseball season. According to the press release, “When debts go unpaid, sparks fly until the shop burns red.”

“Rehearsals are coming along great,” said the 48-year-old DeWitt, who plays a character named Eddie Armstrong. “It’s a lot of work, but I really enjoy it. I don’t mind the huge commitment.”

Preparing for the play has made DeWitt’s already busy schedule even more hectic. On a normal day he is up before dawn conducting fitness classes for scores of white collar clients. He then spends several hours at rehearsal before conducting more evening fitness classes. By the time he gets home, it is often too late to dote on his beloved three-year-old son Douglas.

DeWitt makes no bones about the fact that his greatest desire is to be a movie actor. When he first started taking acting classes, he would have expected to be much further along in his thespian career, but insists that all of the rejection he has experienced will not dissuade him.

“Some people have suggested I quit because of all the rejection,” said DeWitt. “There is so much of it in this business. But I don’t see it that way. I know I have talent, and I have the look to be a middle-aged character actor.”

DeWitt said that he was a very handsome young man, but his looks “got destroyed by boxing.” In the early years of his pugilistic career, he took the advice of “imbeciles” and had the cartilage removed from his nose so he could breathe more effectively. The nose subsequently collapsed, which gave him the look of a boxer who took a lot more punches than he gave.

“I would have run through a wall for my boxing career, so it sounded like a good idea at the time,” said DeWitt, whose mother was Italian and whose father was German-Dutch.

“But the operation was a total waste of time and money,” he continued. “When the nose collapsed, it made it look like I had been a punching bag. The reality is I didn’t get hit that much throughout my career. A lot of guys got hit 10 times more than I did. My nose was horrifying, but if I had been hit as much as the nose made it look, I’d be brain dead right now. We wouldn’t be having this conversation.”

DeWitt was a lot better fighter than his record might indicate. In 1986 he traveled to Detroit, the hometown of the legendary Thomas Hearns, where he lost a 12 round decision that DeWitt still says was very winnable.

“Everything was stacked against me when I fought Hearns,” explained DeWitt. “Not only was he a superstar, he was one of the most feared fighters in the world. When I watch the fight with the volume off, I can’t believe how close it was. At the end of the fight, I swear I didn’t have a mark on me and he was all busted up. I should have gone for the gusto and opened up the few times I had him pinned on the ropes.”

When DeWitt turned pro, at the age of 18 in 1980, it was a tough time to be a middleweight, even for one as talented as he was. Boxing was booming in Atlantic City, where DeWitt quickly became an ESPN staple. He was also the top attraction at the Westchester County Center in White Plains, which was near his hometown of Yonkers, New York.

DeWitt battled a who’s who of up-and comers, top prospects, contenders and future title challengers. He won the ESPN middleweight championship against the favored Mike Tinley in 1984.

Had he not lost a decision to Robbie Sims, the half-brother of middleweight king Marvin Hagler, in August 1985, he was guaranteed a title shot against the reigning champ.

“I let everyone down, including myself,” said DeWitt. “I just wasn’t focused. I had a lot of personal stuff going on.”

His 1987 fight with the late Tony “The Fighting Postman” Thornton, who later challenged Roy Jones Jr. for the light heavyweight title, was an ESPN classic. The fight was initially ruled a draw after 12 rounds of breathtaking action, but DeWitt emerged victorious after a thrilling 13 round tie-breaker.

At the end of 1988, he traveled to Monaco, where he was stopped in seven rounds by WBA champion Sumbu Kalambay. In his next fight, however, he won the vacant WBO middleweight title when he avenged the earlier loss to Robbie Sims. He won a decision despite the fact that cuts incurred in that fight resulted in him needing 45 stitches.

In the first defense of the world title, in January 1990, DeWitt scored a sensational eleventh round stoppage of Matthew Hilton on the undercard of the George Foreman-Gerry Cooney pay-per-view extravaganza in Atlantic City. He still considers that victory one of the highlights of his career.

In his next defense, DeWitt was stopped by Nigel Benn in the eighth round. After a two-year layoff, he fought three times in 1992, but retired for good after being stopped by James Toney, a fight he said he was ill-prepared for and admits taking only for the money.

“I was shot by that time,” said DeWitt. “He was at the top of his game. I was sleepwalking through that fight before (trainer) Victor Valle stopped it (after the sixth round). Had we fought earlier in my career, I think I could have beaten him.”

Shortly after leaving the ring for good, DeWitt started taking acting classes, quickly developing a passion for performing before a different type of audience. He loved the way he was able to express himself, and calls acting “a study of human behavior, not just the reading of words.”

He also tried his hand at standup comedy, doing 29 shows in one year at such New York institutions as Caroline’s and the Gotham Comedy Club.

“That is more nerve-wracking than acting or boxing,” said DeWitt. “You’re one person on the stage, with no help from anyone. You have a 10 minute slot, and you have to make people laugh.”

DeWitt is proud of the fact that in every one of his acts, which were made up mostly of one-liners, he made the audiences laugh.

“If I hadn’t been lazy, and put my heart into comedy the way I have with theater and film, I think I would have been successful,” he said. “But acting is my passion, so that’s where I have put all of my energies.”

DeWitt was asked if he was experiencing any butterflies in the days before the opening of “The Cutting Den.”

“Not at all,” he responded. “I’ve worked hard at this craft, so it’s not very intimidating. I’m well-prepared. All I have to do is walk on stage, not miss my cues, and say my lines. Traveling alone to Detroit, to fight a legend like Hearns in his hometown, that’s pressure. This is easy compared to that.”