Take 5 is the latest video from 11 year-old skateboarders Nic and Tristan Puehse, which was mostly filmed at the incredible Black Pearl Skatepark located in beautiful Grand Cayman.

Their videos on YouTube have been viewed more than 10 million times and are among the most popular and watched of all-time! Their Take 4 video was a collaboration with hip/hop legend and actor LL Cool J.

The fraternal twins began skating at the age of 6. Since then, they have won more than 60 competitions between them. They have been featured in the New York Times, appeared twice on Ellen DeGeneres CNN, ABC Nightline, Fuel TV and Sports Stars of Tomorrow. 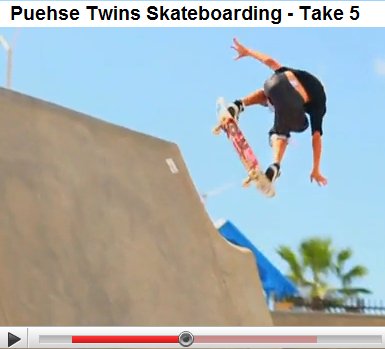 To watch more videos, or for additional information about Nic and Tristan, visit www.skateboardingtwins.com.