Before the overtime period in the 2011 NCAA Men’s Ice Hockey championship final, Minnesota-Duluth coach Scott Sandelin told his team, “This is our time.” The pep talk worked as Kyle Schmidt received a back-hand pass from Travis Oleksuk in front of the net and pushed the puck past Michigan goaltender Shawn Hunwick. It was at the 3:22 mark in overtime. The Bulldogs went crazy on the ice as did the partisan crowd of 19,222 at the Excel Energy Center. It was a hard fought 3-2 victory for UM-D.

Bulldog junior goalie Kenney Reiter only had to make 15 saves but he came up big when it counted.

This was the first time that the Minnesota-Duluth won the NCAA crown. Their previous appearance in the title game came in 1984 when they lost to Bowling Green, 5-4 in the fourth overtime, at Lake Placid, N.Y. 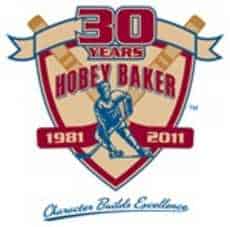 “Get pucks to the net. Don’t pass up shots. Make sure we’re taking care of the puck,” said Sandelin when discussing what he told his team before overtime. “I didn’t say it five times, but I told them it’s our time. I told them you’ve been in this situation all year. You’ve been in the most games, won the most games. It’s your time. And whether they bought into it, I don’t know. I was running out of things to say.”

“I thought we turned the puck over too often. Maybe we were a little jittery. We made some good plays but too many turnovers. Way too many turnovers starting in the first period,” said Michigan coach Red Berenson.

Next year’s NCAA Frozen Four will be in Tampa, Florida. The Bulldogs, as a team were honored in Minneapolis and threw out the first pitch at Target Field before the Twins game Sunday.

2011 – Hobey Baker Winner Announce Miami University senior forward Andy Miele, a Grosse Pointe Woods, Michigan native was announced as the Hobey Baker Memorial Award winner. The presentation is given annually to the top player in college hockey. The announcement at the Energy Center was as part of the NCAA’s Frozen Four weekend.

“I’m so honored to receive the Hobey Baker Award on behalf of Miami University,” Miele said as he accepted the honor. “As any hockey player knows there are many people to thank with any success that comes their way.” Miele also an All-America led the RedHawks to the CCHA Championship this year. He led the NCAA in scoring with 71 points.

“Andy is a special player and a special person,” Miami coach Enrico Blasi said. “His teammates are a special group of guys. When [Andy] says he wants to share this award with his teammate, that’s the truth. That’s the way we’ve created our culture and our program.”

Miele who started playing youth hockey in Fraser, Michigan signed a pro contract with the NHL’s Phoenix Coyotes and reported for practice last Monday. He was assigned # 21 but is not eligible to play in the playoffs. Windsor native and Coyote defenseman Ed Jovanovski said, “Andy will help us in the future.” Phoenix and Detroit will square off in the first round of the NHL Stanley Cup Play-offs.

Miele beat out Boston College junior forward Cam Atkinson and North Dakota senior forward Matt Frattin for the award, as they were also among the Hobey Baker Award finalists.

The 2011 Hobey Baker Awards Banquet will honor Miele and the Legend of College Hockey honoree, Herb Brooks. This year’s event will be held at St. Paul River Centre, on Thursday, June 23rd. www.hobeybakeraward.com